The country reported 202,721 new COVID-19 infections, including 202,647 local cases, raising the total caseload to 4,869,691, according to the Korea Disease Control and Prevention Agency (KDCA).

The country reported more than 200,000 daily cases for five days in a row. The daily caseload surpassed 200,000 for the first time Wednesday and peaked on Friday with a record high of 266,850 cases.

While omicron causes less severe symptoms than the delta variant, the sheer size of the omicron surge escalated COVID-19 deaths and hospitalizations. 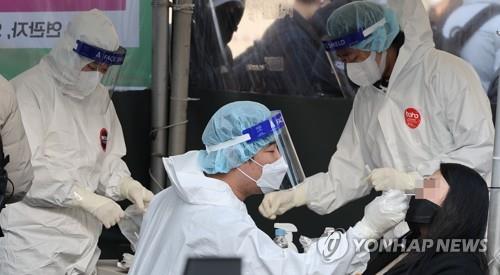 On Monday, the KDCA raised the country's risk level of the pandemic to the highest for the week ending Saturday, considering the number of critical cases, bed occupancy rates in intensive care units, and rates of patients aged 60 and above.

It had maintained the Level 4 of the five-tier system for the past six weeks.

As of Saturday, the omicron variant accounted for 100 percent of all locally transmitted cases confirmed in South Korea.

It also increased the use of rapid antigen self-test kits and at-home treatment to prevent hospitals from being overwhelmed with COVID-19 patients.

Virus-related health protocols were eased, allowing cafes and restaurants to run until 11 p.m., starting Saturday, to reduce financial pain for small businesses. But private gatherings of more than six people are still prohibited.

Of the locally transmitted cases, Seoul reported 37,483 new cases. The surrounding Gyeonggi Province and the western city of Incheon added 52,729 and 12,603 new infections, respectively. Cases from overseas rose by 74 to a total of 29,906.

More than 1.16 million people are currently receiving at-home treatment, up 194,598 from a day earlier.

As of Tuesday, 31.8 million people, or 62.1 percent of the country's 52 million population, had received booster shots. The number of fully vaccinated people came to 44.4 million, accounting for 86.5 percent, according to the KDCA. 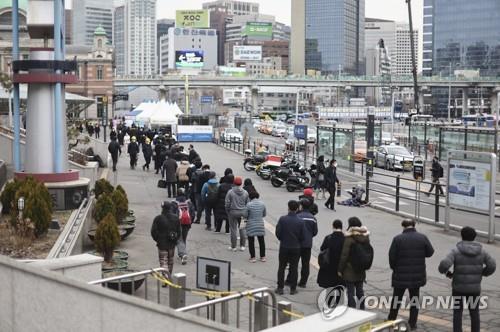