SEOUL, March 8 (Yonhap) -- South Korea has sought measures to minimize potential impacts of Russia's decision to put South Korea on its list of "unfriendly nations" amid concerns over its damage to exporters and other business entities, the trade ministry said Tuesday.

Trade Minister Yeo Han-koo held an emergency meeting with local associations for IT firms, carmakers, and shipbuilders, as well as state-run trade agencies and experts, following Russia's announcement of the unfriendly nations list after Seoul joined international sanctions against Moscow over its invasion of Ukraine.

The list also includes the United States, the European Union and a dozen other nations.

Russia's countermeasures have been widely anticipated, and a series of retaliatory steps will be in place, such as all corporate deals being possible upon the approval by the Russian government, an official of the South Korean Embassy in Russia said.

Under the decision, the South Korean government, firms and individuals can collect debts only in the Russian ruble, he added.

"We are now checking details with the Russian government and its central bank so as to assess potential impacts of the measures on our companies and the economy," the official said.

Industry officials have voiced concerns over looming foreign exchange losses to be caused by the ruble-based payments and other negative impacts, and called for state support.

"We will ramp up monitoring of the related situation and swiftly analyze necessary data to seek measures as soon as possible," Yeo said. 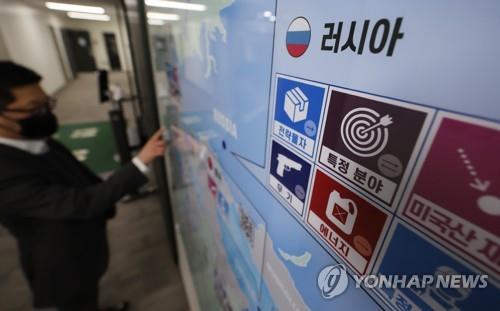