(ATTN: UPDATES throughout with more details)
By Song Sang-ho and Kang Yoon-seung

The crossing came just a day ahead of South Korea's presidential election and amid renewed tensions over recent North Korean missile launches, including a purported "reconnaissance satellite" development test Saturday.

The patrol boat crossed the Northern Limit Line (NLL), a de facto inter-Korean maritime border, at 9:49 a.m. as it traced the other ship that breached the NLL 15 minutes earlier, the Joint Chiefs of Staff (JCS) said.

The military boat traveled about 1 kilometer south of the NLL but shifted course back home after a South Korean warship fired three warning shots, using a 40-mm gun.

The South Korean Navy seized and inspected the other steel ship carrying seven shipmates, including six wearing military suits, and hauled it to the western front-line island of Baengnyeong for investigation.

The seven unarmed North Koreans are said to have no intention of defecting to the South and claim their ship mistakenly veered into South Korean waters while transporting materials for relocation.

It still remains unknown whether the vessel is for military or civilian use.

The South has sent messages to the North about the border crossing incident two times -- one thorough a commercial line and the other via a military communication line -- according to the JCS.

The NLL has long been a flashpoint as the North has disputed it, arguing that it was unilaterally drawn by the U.S.-led U.N. Command after the 1950-53 Korean War. 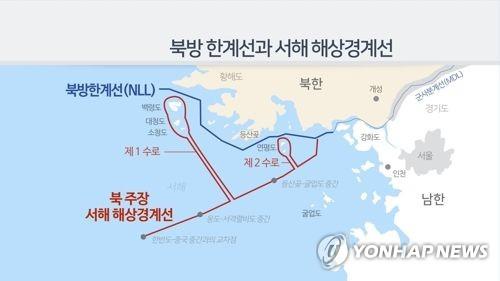