SEOUL, March 9 (Yonhap) -- South Korea sent a North Korean boat and seven sailors back home Wednesday, a day after it veered across their western sea border due to a "navigational error and mechanical glitch," Seoul's defense ministry said.

Seoul decided to repatriate them on the basis of "humanitarian" considerations and in respect for their wishes, the ministry said.

The South Korean Navy seized the boat and crew for investigation on Tuesday morning after the vessel crossed the Northern Limit Line (NLL), the de facto maritime border in the Yellow Sea.

"It has been confirmed that the North Korean boat crossed the line (NLL) due to a navigational error and mechanical glitch, and all of the sailors have expressed their will to return to the North," the ministry said in a text message sent to reporters.

During an investigation here, all of the sailors said that they accidentally moved across the NLL due to sea fog when they were traveling from one island to another to transport materials for relocation, according to a Seoul official.

The sailors "strongly" hoped to return and even refused to eat until their repatriation, the official told reporters on condition of anonymity.

The South handed over the boat and sailors to the North in waters around the NLL at 2 p.m., according to the ministry.

The boat's entry into South Korean waters came shortly before a North Korean patrol boat also crossed the NLL to track it.

It shifted course back to the North as a South Korean warship fired warning shots. The other boat was seized and taken to the western front-line island of Baengnyeong.

It marked the first NLL breach by a North Korean military ship since the two Koreas signed an accord in 2018 to prevent accidental clashes and reduce tensions.

The incident occurred on the eve of South Korea's presidential election and amid renewed tensions caused by recent North Korean missile launches, including a purported "reconnaissance satellite" development test Saturday. 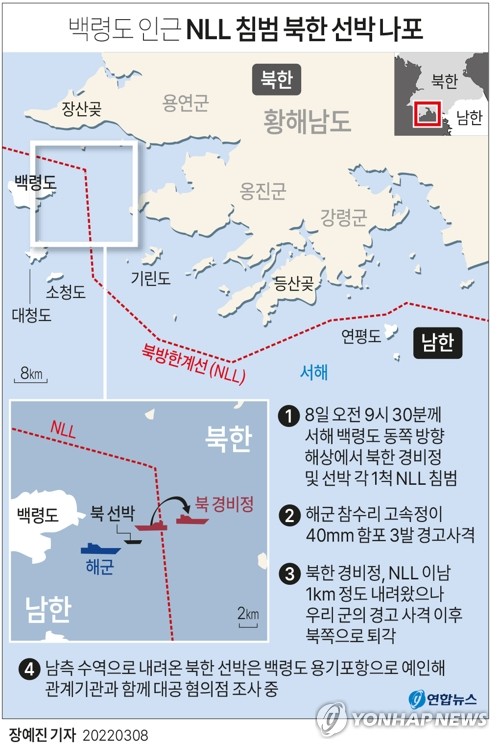