SEOUL, March 10 (Yonhap) -- South Korean president-elect Yoon Suk-yeol is expected to take a hard-line stance on North Korea, similar to approaches under the conservative Lee Myung-bak and Park Geun-hye administrations, after taking office in May.

He appears tempted to undo much of what the liberal Moon Jae-in administration has done over the past five years to engage Pyongyang in dialogue.

Yoon, of the conservative main opposition People Power Party, won the election at a time when the Kim Jong-un regime has shifted back to provocative mode. Pyongyang has conducted a series of ballistic missile tests in recent months and even hinted at the possibility of firing a long-range rocket. The Korea peace process is in the doldrums.

In response, the top prosecutor-turned-politician has raised the need to consider a preemptive strike on North Korea in the event of an imminent threat and the deployment of an advanced U.S. missile defense system, called THAAD, to counter the North's growing missile threats. 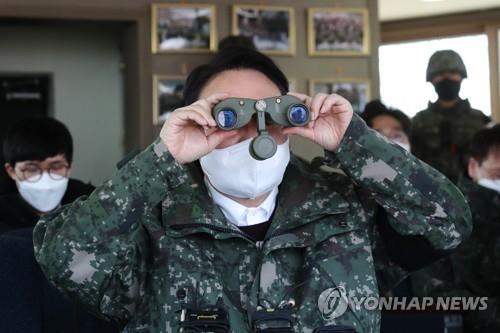 From the start of his term, Yoon will likely be faced with the daunting task of handling Pyongyang's sabre-rattling and renewed brinkmanship.

Experts say Yoon's top priority in foreign policy will be strengthening the alliance with the U.S., while maintaining relations with China and Russia to use them as a leverage to resume dialogue with North Korea.

"From the beginning of his term, the new president will have to deal with the sharply deteriorated geopolitical situation on the Korean Peninsula," Cheong Seong-chang, director of center for North Korean studies at the Sejong Institute, said.

Given Yoon's campaign pledge and other statements so far, Cheong added, he is largely taking on the policy of the two former conservative presidents, Lee and Park, who sought to put pressure on the North for its denuclearization.

Yoon has accused the Moon administration of effectively helping the Kim regime buy time to advance its major weapons program and stressed "only strong deterrence" can guarantee South Korea's peace against the North's threats.

Some pundits say Yoon may tone down his hawkish stance, seen as in part aimed at winning support from conservative voters, to some extent.

"His messages going forward -- now as president-elect -- will be and should be different," Lim Eul-chul, a professor at the Institute for Far Eastern Studies. "The question now is how to send a well-tailored and strategic message to North Korea to keep the situation under control."

Yoon has said he will try to resume nuclear talks with North Korea based on a predictable denuclearization roadmap under a reciprocity principle.

In particular, Seoul is facing an increasingly tricky balancing act in the face of an intensifying Sino-U.S. rivalry and plunging U.S.-Russia relations amid the Ukraine crisis.
scaaet@yna.co.kr
(END)