(ATTN: UPDATES with reports of statement from US INDOPACOM, additional information in paras 2-4; CHANGES headline, lead; RESTRUCTURES)
By Byun Duk-kun

WASHINGTON, March 9 (Yonhap) -- The United States has intensified its intelligence collection activities around the Korean Peninsula, while its missile defense forces in the region have also been ordered to increase alert amid an increase in North Korean missile activities, the U.S. Indo-Pacific Command (INDOPACOM) said Wednesday.

The move follows nine rounds of North Korean missile tests, including seven in January that marked the largest number of missile tests conducted by North Korea in a single month.

"The United States condemns the recent series of ballistic missile launches by the DPRK," the Hawaii-based Indo-Pacific Command said in a released statement.

"In light of this, on March 7, 2022, the U.S. Indo-Pacific Command ordered intensified Intelligence, Surveillance, and Reconnaissance collection activities in the Yellow Sea, as well as enhanced readiness among our ballistic missile defense forces in the region," it added.

The U.S. Office of the Director of National Intelligence said Tuesday in its Annual Threat Assessment report that North Korea may be poised to resume nuclear and intercontinental ballistic missile testing in the year.

"Our commitment to the defense of the Republic of Korea and Japan remains ironclad," the statement said. "The United States remains committed to serious and sustained diplomacy toward the complete denuclearization of the Korean Peninsula." 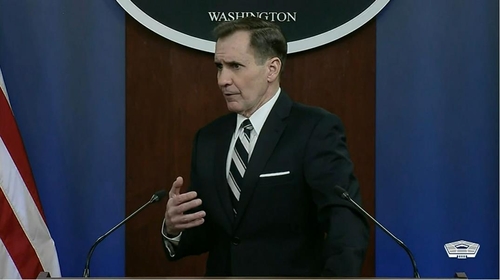 "We've made clear our concern over the significant increase in DPRK missile testing activity, which we continue to believe undermines peace and security and is destabilizing the region, as well as the international community," the Pentagon press secretary said during a press briefing.

"So again, I think in our case here, actions are speaking louder than words," Kirby said. "We have made clear what our concerns are, and we're acting on those concerns," he added.

Kirby also highlighted the close relationship between the U.S. and South Korea, while praising Seoul for imposing sanctions against Russia over its invasion of Ukraine.

His remarks come after Moscow listed South Korea, along with the U.S. and dozens of other countries that have imposed sanctions on Russia, as "unfriendly" nations.

"We are grateful that the South Koreans, our allies, have also levied sanctions and (are) being willing to offer support," he said.

"I think that's indicative of our close friendship and partnership but also more indicative of ... their concerns about what Russia is doing."