SEOUL, March 10 (Yonhap) -- President-elect Yoon Suk-yeol held a phone conversation with U.S. President Joe Biden on Thursday, during which they reaffirmed the strong alliance against North Korea's repeated launches of ballistic missiles, according to officials in Yoon's party.

Biden congratulated Yoon on winning the presidential election and invited the conservative president-elect of South Korea to the White House, officials of the People Power Party (PPP) said.

During the 20-minute conversation, Yoon emphasized the need for stronger cooperation between South Korea and the United States over North Korea's recent provocations, PPP officials said.

Biden told Yoon that the U.S. is closely monitoring the situation in North Korea and that close coordination among Seoul, Washington and Tokyo is important for policies on Pyongyang.

Days before the election in South Korea, North Korea fired a ballistic missile toward the East Sea, marking the North's ninth show of force this year.

Observers said the North's latest missile test could be a prelude to preparations for a long-range rocket launch amid stalled denuclearization talks with the U.S.

Yoon also showed his respect for the U.S. to play a leading role against Russia's invasion of Ukraine, PPP officials said.

Yoon, a former top prosecutor, has pledged to deepen the alliance with the U.S. and take a tougher stance on North Korea. 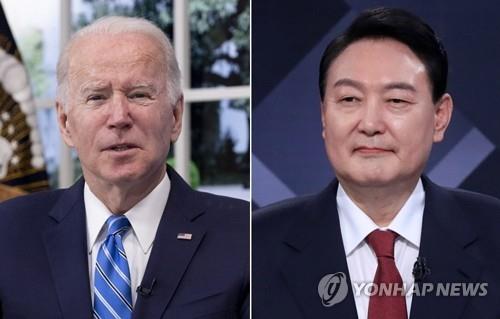