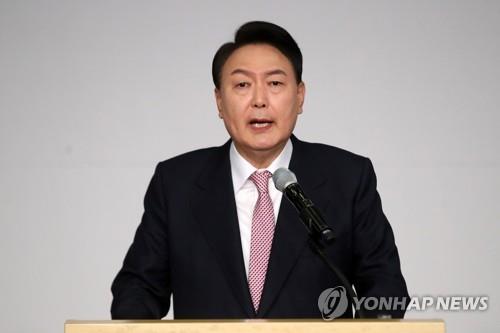 Apparently aware of the razor-thin victory, Yoon emphasized national unity and close cooperation with the DP controlling the National Assembly in a news conference held soon after his election win.

On diplomacy, Yoon said his priority policy goal is to solidify South Korea's status as a global pivotal country to contribute to freedom, peace and prosperity, based on dignified diplomacy and strong national security.

Earlier, Yoon talked with U.S. President Joe Biden on the phone prior to his visit to the Seoul National Cemetery and they affirmed strong bilateral alliance and close cooperation, according to PPP officials.

Biden congratulated Yoon on his election win and invited him to visit the White House during the 20-minute conversation, they said.

Yoon emphasized the need for stronger cooperation over North Korea's provocations, while Biden said that the U.S. is closely monitoring the situation in North Korea and that close coordination among Seoul, Washington and Tokyo is important for policies on Pyongyang, they said.

Biden was the first foreign leader to personally congratulate Yoon on his election, they added.

The White House also confirmed the two leaders' phone conversation, saying they affirmed the strength of Seoul-Washington alliance and committed to maintain close coordination on addressing the threats posed by North Korea's nuclear and missile programs.

Yoon also mentioned his phone talks with Biden in the news conference, saying the U.S. leader expressed a wish for a summit meeting soon after his inauguration to discuss further development of the bilateral relationship.

"I cannot disclose all the details of my conversation with the U.S. president here. I received his congratulations on my election win," Yoon said.

Yoon said he is determined to build a future-oriented relationship with Japan.

"In relations between South Korea and Japan, it is important to find out what will be beneficial to both countries and to the people of both countries in the future rather than in the past," the president-elect said.

South Korea and Japan have long been at odds over territory and other historical disputes stemming from Japan's 1910-45 colonial rule of the Korean Peninsula.

On relations with China, Yoon said he will promote a bilateral relationship of mutual respect.

On North Korea, Yoon said he will "sternly" respond to any illegal or unreasonable behavior by the country "in accordance with principles," but the window of conversation with Pyongyang will "be always left open."

He then vowed to build a strong national defense that can reliably deter any provocations from the North in order to protect the people's safety and property and his nation's territory and sovereignty.

"We also face the task of strengthening our global diplomatic capabilities amid the North Korean nuclear threats and growing tensions over U.S.-China strategic competition," Yoon said.

Yoon also made comments on domestic political situations, saying he will only trust and follow the will of the people.

"I will solely trust the people and follow their will," he said.

"(The election results) constitute a call for reform, and the restoration of justice and common sense as well as the people's desperate appeal to do politics of unity, not division," Yoon said.

Yoon faces a daunting challenge of how to work with an unfriendly National Assembly controlled by the DP and heal deep national divisions laid bare in one of the most bitter political campaigns in recent memory.

Including the DP, the liberal bloc holds some 180 seats in the 300-seat Assembly. Without their help, Yoon's presidency could end up in a "vegetative" state unable to pass key agenda items until the next parliamentary elections in 2024.

Yoon said the current National Assembly controlled by the DP may offer an opportunity for the nation's democracy and politics to become much more mature.

He again stressed cooperation with the DP during a disbandment ceremony for the PPP's election committee at the National Assembly in the afternoon.

Regarding the economy, the president-elect promised to turn away from a government-led economy toward a human-oriented one so as to create jobs and beef up the middle class.

"I will keep away from any forces or ideologies that threaten the free democracy and adhere to the common sense of the people in running the nation," he noted.
(END)