Trading volume was moderate at about 788 million shares worth some 12.1 trillion won (US$9.8 billion), with gainers outnumbering losers 585 to 274. 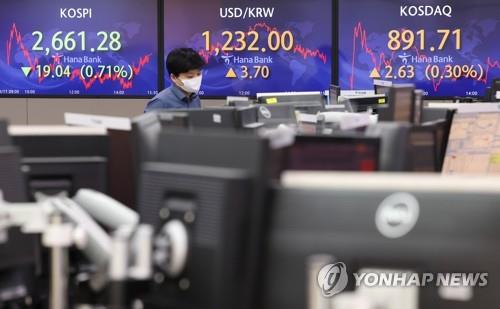 The KOSPI dropped as the U.S. consumer price index for February increased 7.59 percent, the fastest growth in four decades. The U.S. Fed is expected to raise its key interest rates next week.

Investors remain worried that the inflation may climb even further in March, since the February data does not include much of the impacts from the Ukraine crisis, analysts said.

Russia's invasion of Ukraine and the entailing economic sanctions by the U.S. and its allies on the Kremlin has pushed up the oil and commodity prices.

"In a global scope, there are many factors that are further stimulating the inflation hike," Mirae Asset Securities analyst Seo Sang-young said.

The local currency was trading at 1,232 won against the U.S. dollar, down 3.7 percent from the previous session's close.

Bond prices, which move inversely to yields, closed higher. The yield on three-year Treasurys lost 1.2 basis points to 2.255 percent, and the return on the benchmark five-year government bond fell 3.1 basis points to 2.485 percent.