He also insisted the Korea-U.S. FTA (KORUS FTA) will help the countries "weather any storm."

"It is a fact that KORUS FTA expanded the size of the trade pipe between our two countries over 70 percent over the past decade, double and triple investment flow in both directions," Yeo said in a seminar hosted jointly by the Korea Economic institute and Korea Institute of International Economic Policy in Washington.

"I'd like to emphasize that the decade long KORUS FTA was a game changer, which fundamentally transformed the nature of KORUS partnership into an equal and strategic partnership," he added. 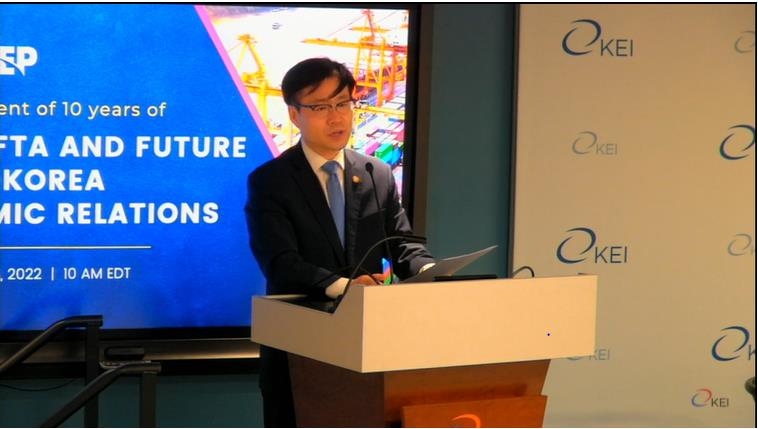 The Korea-U.S. FTA was enacted a decade ago on Tuesday. Yeo is currently on a visit for meetings with his U.S. counterparts, including U.S. Trade Representative Katherine Tai. Yeo and Tai are also set to jointly visit a South Korean-run factory in Michigan that produces SIC wafers.

Yeo said dramatic changes in the global economic environment will require increased cooperation between South Korea and the U.S. in many areas including semiconductor supply chains.

"Now, it is high time to plan ahead the future of KORUS FTA for the next 10 years," he said.

"That is why last November during the KORUS joint committee, headed jointly by myself and USTR Katherine Tai in Seoul, we agreed to continue to develop this trade relationship in a future-oriented approach, initiating new enhanced channels of communication to efficiently effectively address emerging trade issues in areas such as supply chain resilience, emerging technologies, and the digital ecosystem and trade facilitation," added Yeo.

He also welcomed the envisioned new U.S. Economic Framework for the Indo-Pacific, saying it will serve as a "good platform for our two countries to build on the successful experiences over the last 10 years of KORUS FTA."

"I'm fully convinced that our bilateral economic partnership, deeply rooted in KORUS FTA, will weather any storm and have our countries open a new chapter in trade, investment," he added.