During the 15-minute call Monday night, Yoon and Johnson shared concern about North Korea's recent missile tests and a need to cooperate with the United States and the U.N. Security Council for the North's denuclearization, Yoon's spokesperson Kim Eun-hye said in a statement.

The two leaders also agreed that Russia's invasion of Ukraine is a threat to values shared by the two countries and an attack on freedom and democracy around the world, Kim said

They agreed to hold a meeting at an early date after Yoon takes office, she said.

Johnson also told Yoon that he would like to give him Winston Churchill's autobiography after learning that Yoon respects the former British prime minister.

The British prime minister's office said Johnson congratulated Yoon on his election win and said, "He looked forward to deepening the U.K.'s relationship with the Republic of Korea during Yoon's presidency and hoped negotiations would begin later this year on an enhanced trade deal."

"Both leaders shared their ambition to deepen digital, industrial and military cooperation between the two countries," the office said. 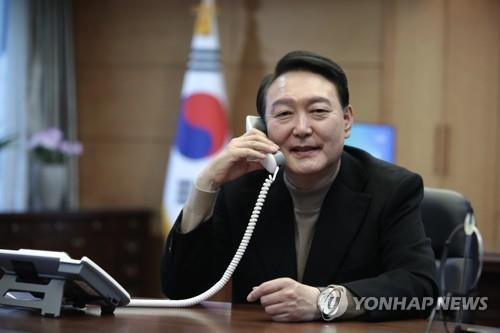