SEOUL, March 15 (Yonhap) -- President-elect Yoon Suk-yeol traveled to the eastern coastal county of Uljin on Tuesday where he met with people displaced by a massive wildfire and promised support for a quick recovery from the damage.

Yoon flew by helicopter to Uljin, about 330 kilometers southeast of Seoul, in his second trip to the county after the first on March 4 when the wildfire broke out. Uljin was one of the regions hit hardest by the wildfire, which was put out nine days after it started.

During the visit, Yoon met with displaced people and promised state support for recovery efforts.

"We will cooperate with the current government, and once the new administration launches in May, we will take better care of it so as to ensure there are no inconveniences to residents," Yoon said. "I hope you won't be too concerned."

The wildfire started in Uljin and became the country's most devastating on record as it spread to nearby areas in Gangwon Province. It took more than 213 hours to put out the main fire, the longest time ever to extinguish such a blaze since related data was first compiled in 1986.

It was also Yoon's second public outing as the president-elect. He visited Seoul's Namdaemun Market on Monday to meet with small merchants hit by the COVID-19 pandemic.

On a separate issue, Yoon said during the visit that he would swiftly resume construction of two nuclear reactors in Uljin -- Shin-Hanul No. 3 and No. 4 -- for the region's economy.

The project to build the two 1,400-megawatt reactors has been put on hold since 2017 following the Moon Jae-in government's nuclear phase-out drive.

Yoon has pledged that he will scrap the nuclear phase-out policy to make the country a powerhouse in nuclear power generation. 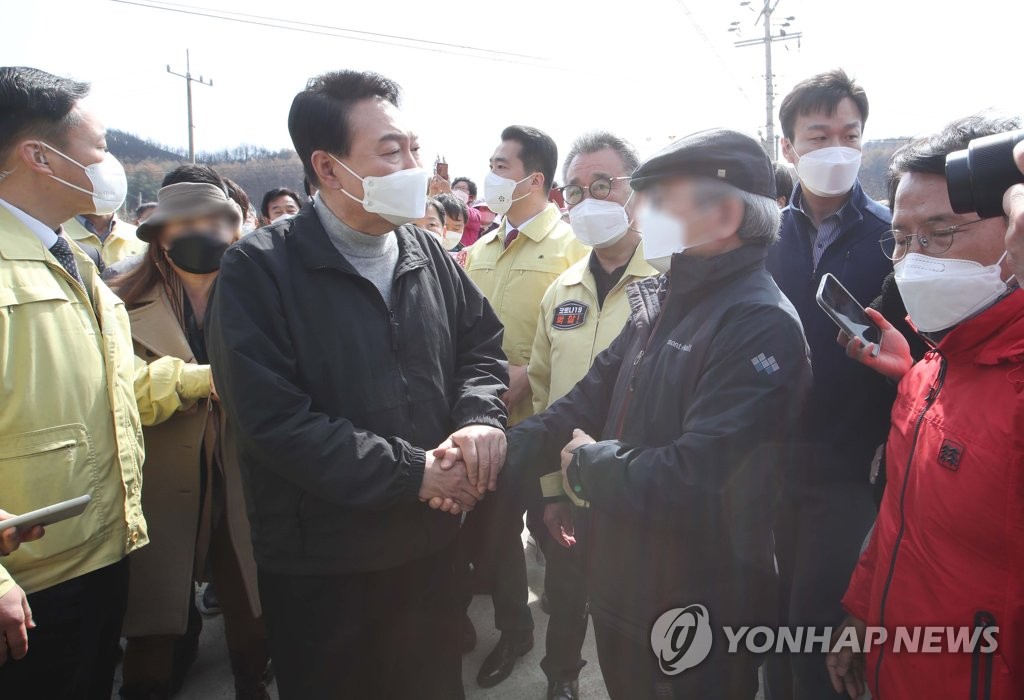