(ATTN: UPDATES with remarks, details from para 3)
By Kim Deok-hyun

SEOUL, March 16 (Yonhap) -- A planned meeting between President Moon Jae-in and President-elect Yoon Suk-yeol has been called off as working-level, pre-meeting discussions have not been completed yet, both sides said.

Moon and Yoon had been scheduled to hold a one-on-one lunch at Cheong Wa Dae on Wednesday in their first meeting since Yoon won the election last week, though the two spoke by phone a day after the election.

Pre-meeting talks have been led by Lee Cheol-hee, senior presidential secretary for political affairs, and Yoon's chief of staff Chang Je-won to set the agenda for the meeting.

Both sides did not provide details on what the problems were.

But a disagreement over whether to pardon imprisoned former President Lee Myung-bak could be one of them, as Yoon planned to ask for a special pardon for Lee, now serving a 17-year prison term for embezzlement and bribery.

Moon and Yoon had also been expected to discuss a range of other issues, including the presidential transition, coronavirus responses and North Korea's moves to test-fire a new intercontinental ballistic missile (ICBM).

Yoon of the conservative People Power Party won the tight election by a razor-thin margin. Yoon's election was partly viewed as a referendum on the liberal Moon administration. 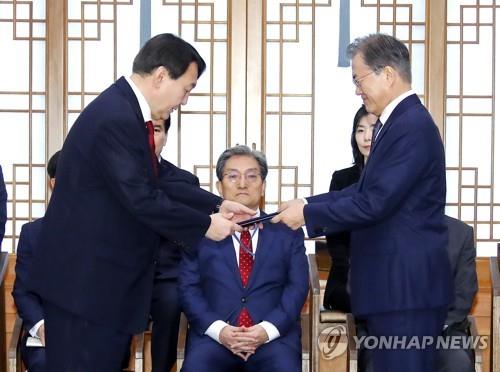