SEOUL, March 17 (Yonhap) -- The U.S. central bank's decision to deliver its first rate hike since 2018 is expected to have a limited impact on South Korea's financial market as the move is in line with market expectations, a senior government official said Thursday.

The Federal Reserve on Wednesday (local time) raised the federal funds rates by a quarter percentage point to 0.25-0.5 percent to fight high inflation, after freezing borrowing costs at near zero since March 2020 to cushion the fallout of the COVID-19 pandemic.

"But amid major central banks' continued efforts to tighten monetary policy, if Russia's default on its foreign debt is materialized, we cannot rule out the possibility that jitters about liquidity (shortages) could occur globally," Lee said at a meeting on macroeconomics.

The official said the finance ministry will actively cooperate with the Bank of Korea (BOK) to take actions to stem potential hikes in bond yields.

In a separate meeting held by the BOK, Deputy Gov. Park Jong-seok said the Fed's rate hike decision was within expectations and its impact on international markets remains "limited" thanks to rising hope for an advance in negotiations between Russia and Ukraine.

He still called for close monitoring on the possible impact from major economies' moves to normalize monetary policy, uncertainty over the war in Ukraine and global supply disruptions on local financial markets and the economy.

Earlier in the day, Finance Minister Hong Nam-ki said the government will step up its efforts to stabilize the foreign exchange market if the won's weakness is deemed excessive.

South Korea's stock and currency markets gained ground as uncertainty over the Fed's policy has been eased. 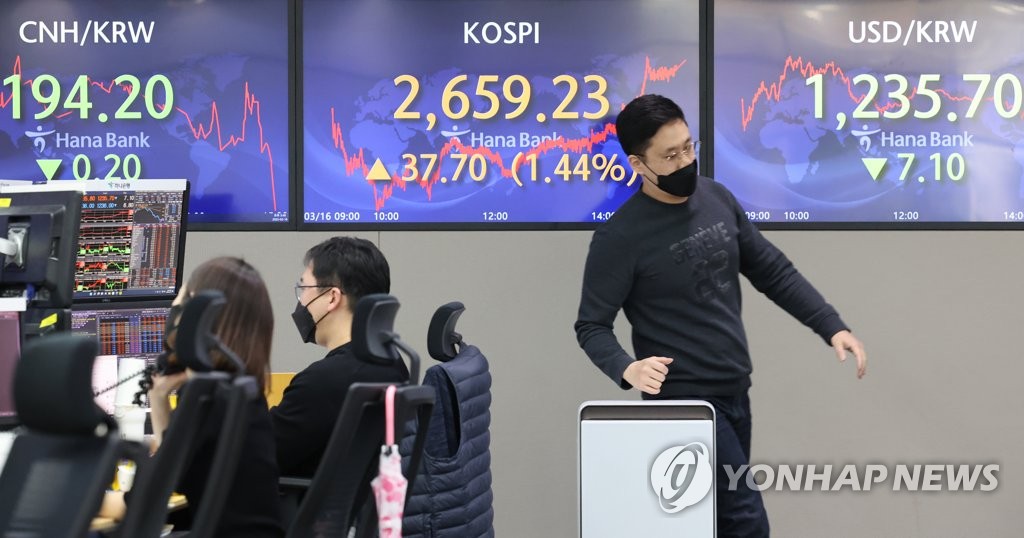