SEOUL, March 18 (Yonhap) -- A professor and students of Ewha Womans University's College of Music will begin holding lunchtime concerts every weekday in front of the Russian Embassy in central Seoul next week to wish for peace in Ukraine, officials said Friday.

The concert series, titled "Small Concert for Peace," will kick off at 12:30 p.m. Monday with 20 to 30 minutes of performances by a cello quartet of professor Bae Il-hwan and three student cellists, officials said.

The concerts will take place at the same time every weekday, weather permitting, until Russia stops its invasion of Ukraine. A string quartet, a Korean traditional music ensemble and other musicians will take part in the event.

Officials said the time of the concert was set at 12:30 p.m. in the hope that more Russian Embassy officials will hear the music being played for peace in Ukraine.

"We have decided to hold the concerts with student musicians as a way to deliver support for peace in Ukraine with music," Bae, who organized the event, said. "One person's hope ends as a dream, but many people's hope can become a reality." 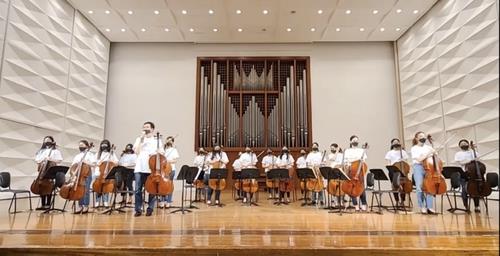 Ewha university professor, students to kick off peace concerts in front of Russian Embassy next week

Ewha university professor, students to kick off peace concerts in front of Russian Embassy next week