SEOUL, March 18 (Yonhap) -- President-elect Yoon Suk-yeol's push to relocate the presidential office has become a hot button issue amid competing views on whether it will help the president better communicate with the people or simply waste resources.

Yoon was elected last week after promising to "return" Cheong Wa Dae to the public in a move intended to demonstrate his commitment to removing the office of the president from its high pedestal.

Yoon's plan was to work from the government complex in nearby Gwanghwamun, keep his aides close in the same building and interact frequently with people passing through downtown. 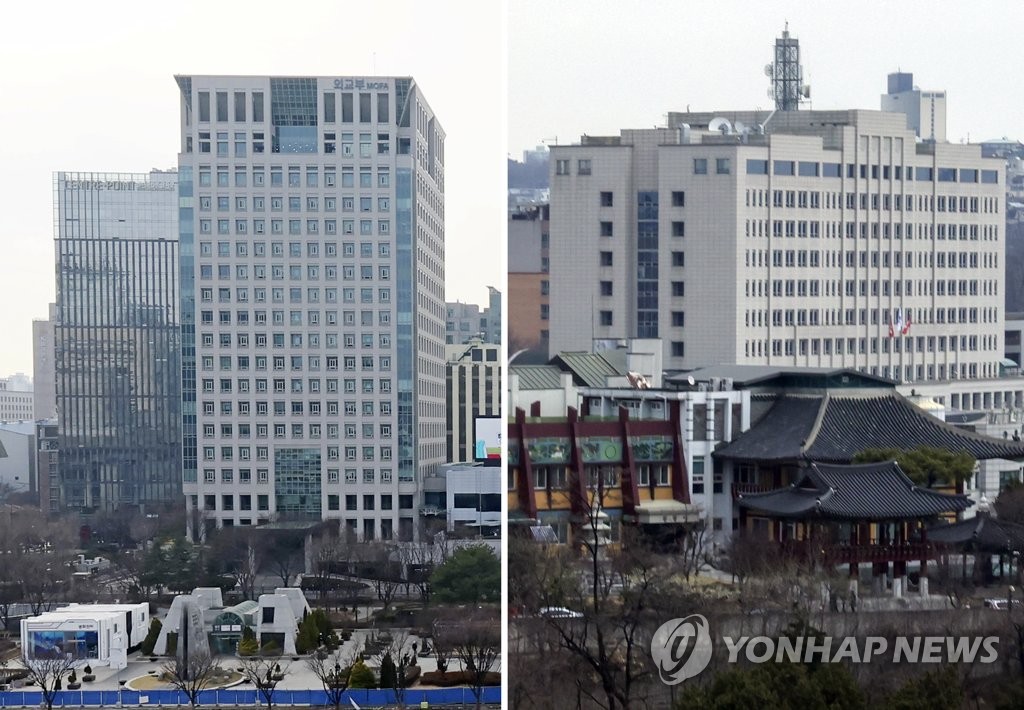 But the vision for a "Gwanghwamun era" hit a snag this week as officials questioned whether the building can be secured from outside threats, given that it is surrounded by other high-rise structures, and whether the Cheong Wa Dae compound can be fully opened to the public if the president still needs to use the underground bunker in national emergencies.

As an alternative, Yoon's transition team began to consider the defense ministry compound in Seoul's central district of Yongsan, which proponents argue would resolve any security concerns and still meet the president-elect's wishes to be closer to the people because of its proximity to a planned national park.

That option, however, was also met with skepticism.

Some insiders worried the incoming government will give the impression of a "military regime" if the president shares his work space with the military, while others claimed the walled compound is no less secluded than Cheong Wa Dae and construction on the planned park could still be years away as the land has yet to be returned from the U.S. military, which uses it as a base.

The ruling Democratic Party (DP) stepped up its attacks on Yoon, who belongs to the main opposition People Power Party (PPP).

"If the president's office moves to the defense ministry, the many departments of the ministry and the Joint Chiefs of Staff ... that are faithfully carrying out their duties inside the compound will all have to stop their work and move before the end of the month," Rep. Kim Byung-joo of the DP, a former Army general, said during a joint press conference Thursday.

"At a time when they must focus on maintaining readiness and respond to real-time events because of North Korea's missile launches and growing security threats, I feel devastated at the reality that the entire military personnel are preparing to move," he said.

While the Gwanghwamun government complex has been ruled out, the adjacent annex building used by the foreign ministry remains one of two options, along with the defense ministry.

The difference is largely due to the rent the foreign ministry will have to pay on new office space after it moves out and the cost of establishing a secure network for communications with overseas missions, according to officials.

But despite the larger space occupied by the defense ministry compound, military sources said it isn't enough to accommodate the presidential office unless some of the current occupants move out.

The compound stands on 276,000 square meters of land and is shared by numerous military commands and units with some 4,000 military personnel and public servants.

The 50 billion won involved in moving the presidential office to the defense ministry does not include the cost of moving military facilities out of the compound. 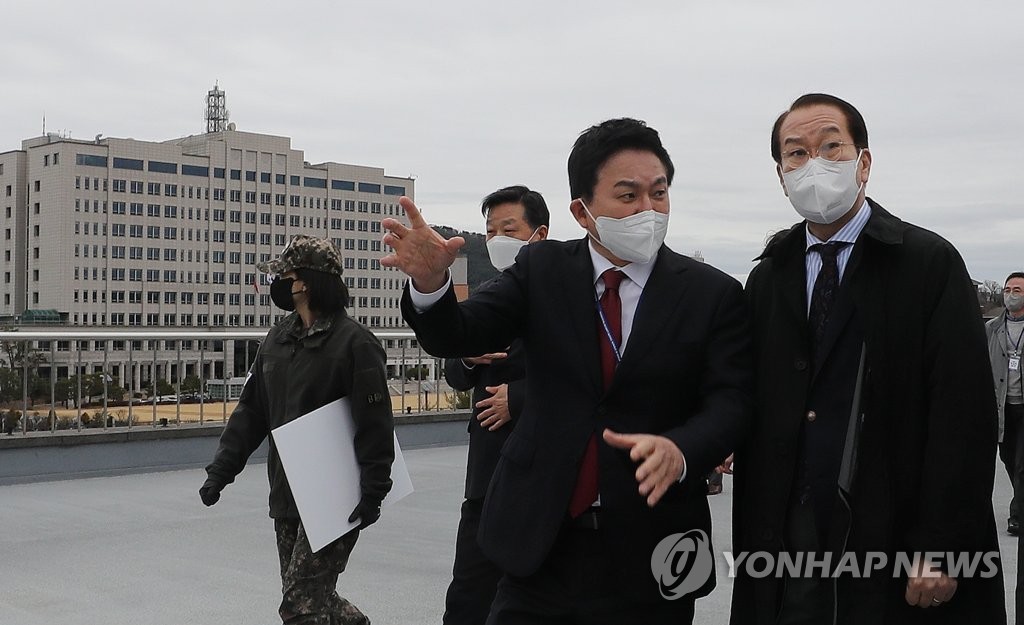 Yoon is not the first person to pledge to relocate Cheong Wa Dae.

President Moon Jae-in made a similar pledge before scrapping it over logistical and security issues, leading some of his aides to join the relocation debate in apparent defense of Moon.

Park Soo-hyun, senior presidential secretary for public communication, said Thursday that the current Cheong Wa Dae layout does not prevent Moon from communicating with his aides and that they are always able to meet "within a minute or two."

His comment came after Yoon's spokesperson, Kim Eun-hye, claimed that it takes "a considerable amount of time" to move between the president's office and his secretaries' office building.

"President Moon has never used the office in the main building," Park wrote on Facebook, saying there must have been confusion with the Cheong Wa Dae of the administrations of former Presidents Lee Myung-bak and Park Geun-hye.

Tak Hyun-min, Moon's protocol secretary, added on his Facebook page: "I just checked the travel time (between the main building office and the secretaries' building), and it took 30 seconds running and 57 seconds walking."

On Friday, members of Yoon's transition team, including Vice Chairman Kwon Young-se and PPP Rep. Yoon Han-hong, the point man for the relocation project, visited the two candidate sites and were briefed on the facilities by ministry officials.

"We'll also look at cost issues, and whether it will be convenient for nearby residents and the public," Kwon said.

Yoon's spokesperson made clear the relocation will move forward following the president-elect's decision Thursday to choose between the foreign ministry building and the defense ministry building.

Yoon made the decision after a meeting with his transition team members,

"Because it was the most important of President-elect Yoon's campaign promises, as much as it is important, there needs to be a consensus," Kim said at a press briefing Friday. "We will return Cheong Wa Dae to the people before the spring flowers wither."

Earlier this week, she had said there is "zero chance" Yoon will move into Cheong Wa Dae. 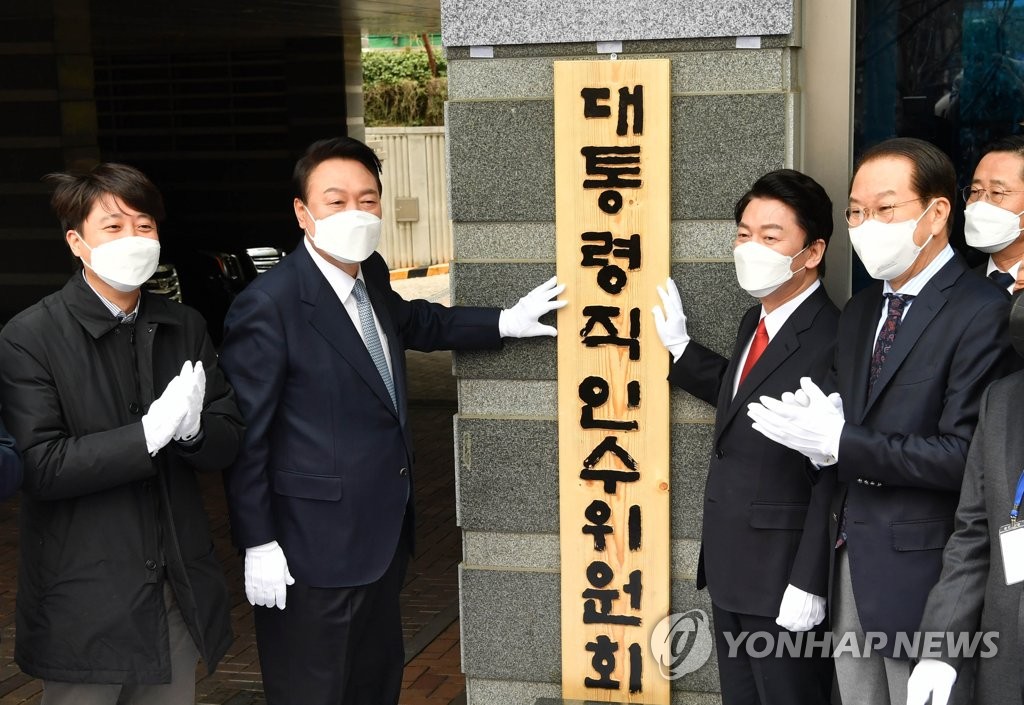