(ATTN: UPDATES with response from Yoon side in last 3 paras)

SEOUL, March 18 (Yonhap) -- President Moon Jae-in on Friday expressed his wish to meet with President-elect Yoon Suk-yeol at the earliest possible time, two days after their scheduled lunch was called off at the last moment.

Moon said it is his duty to the people to have an open and candid conversation with Yoon as soon as possible, according to presidential spokesperson Park Kyung-mee. 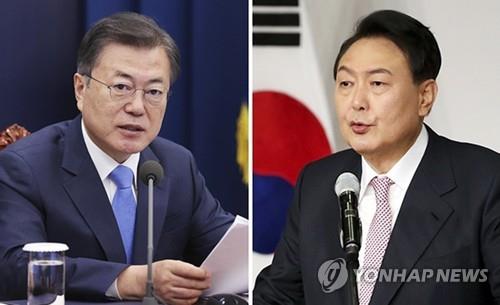 "The door of Cheong Wa Dae is always open. Any prior coordination for the meeting may not be necessary," Moon was quoted as saying.

Moon's remarks are being interpreted as a message to the effect that he hopes to meet with Yoon as soon as possible without being bound by a specific agenda.

Moon and Yoon had been scheduled to have a one-on-one lunch at Cheong Wa Dae on Wednesday in their first meeting since Yoon won the election last week.

But both sides announced the postponement of the lunch meeting that morning, saying pre-meeting talks between Lee Cheol-hee, senior presidential secretary for political affairs, and Yoon's chief of staff Chang Je-won were not completed.

Some watchers speculated the two sides had failed to narrow differences on a pardon of imprisoned former President Lee Myung-bak, and the planned reshuffles of the Bank of Korea governor and high-profile government figures, among others.

As Moon suggested he is ready to discuss any topic with Yoon, they forecast the two sides are expected to hasten efforts to reschedule the meeting.

In response, Yoon's spokesperson, Kim Eun-hye, vowed to make efforts to produce a desirable outcome for the people.

"Regarding a meeting at Cheong Wa Dae, President Moon and President-elect Yoon are communicating closely based on mutual trust," Kim said in a message to the press.

In her earlier press briefing, Kim asked for more patience, saying Chang and Lee were in the midst of fine-tuning the agenda.