Trading volume was moderate at about 634 million shares worth some 11.3 trillion won (US$9.3 billion), with gainers outnumbering losers 547 to 303. 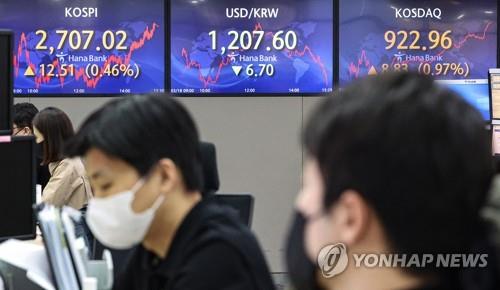 Stocks lifted on optimism about Turkey's attempt to mediate the Ukraine-Russia peace talks into a positive result.

Investors are also digesting the U.S. Federal Reserve's hawkish stance to further raise the key interest rates to reign in the price pressure.

"The inflation pressure and the geopolitical risk related to Russia have been considerable, but the eased uncertainties about the recent FOMC meeting results seem to have lifted part of such pressure on local stocks," said Samsung Securities analyst Kim Yong-goo.

The local currency closed at 1,207.6 won against the U.S. dollar, up 6.7 won from the previous session's close.

Bond prices, which move inversely to yields, closed lower. The yield on three-year Treasurys added 1.4 basis points to 2.231 percent, and the return on the benchmark five-year government bond rose 2.6 basis points to 2.495 percent.