YANGYANG, South Korea, March 19 (Yonhap) -- Ten people were injured in a 17-car pileup on a snowy expressway connecting Seoul and the eastern coastal town of Yangyang on Saturday.

With over 80 centimeters of unseasonable snow dumped on the area Saturday, the multi-vehicle crash occurred at 8:33 a.m. on the eastbound side of the Seoul-Yangyang Expressway near a tunnel in Yangyang, some 215 kilometers east of the capital. 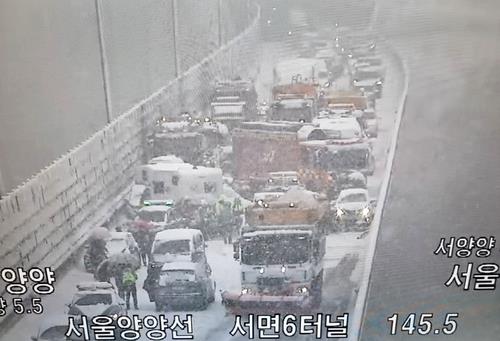 Authorities said a total of 17 cars collided on a slippery section of the road. Four people in one sedan and six others in a van were taken to a nearby hospital with injuries of varying severity.

As the vehicles were scattered across two lanes, the affected section on the expressway was blocked off for about 90 minutes, causing severe congestion for eastbound traffic.
(END)

10 injured in pileup on snowy expressway

10 injured in pileup on snowy expressway