SEOUL, March 21 (Yonhap) -- If South Korean high jumper Woo Sang-hyeok was feeling nervous before starting his competition at the world indoor championships in Belgrade on Sunday, he did a great job hiding it.

Butterflies fluttering inside his stomach, Woo soared into South Korean athletics history in the Serbian capital, as he captured gold at the World Athletics Indoor Championships. He is the first South Korean to win a world title in any track and field event, indoor or outdoor.

Woo jumped 2.34 meters at Stark Arena for the monumental gold medal. He had entered the competition as world No. 1 for the season, the only male high jumper to have cleared 2.36m indoors. That status only put more burden on Woo's shoulders, though the easy smile on his face masked whatever nerves he might have been feeling. 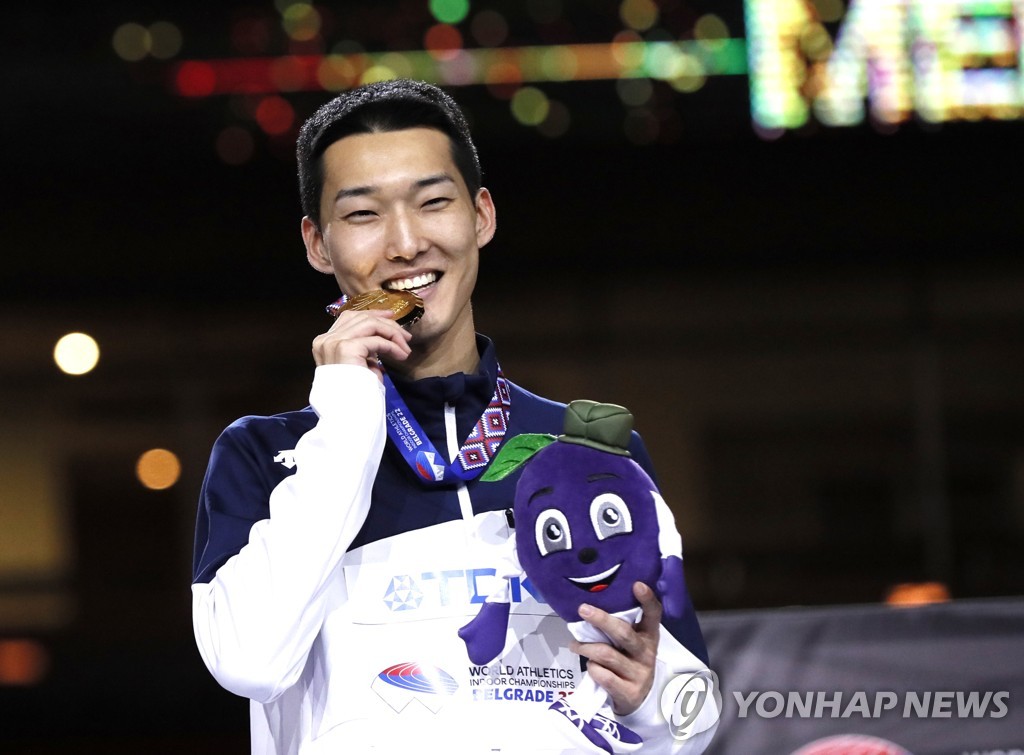 "I've never come into any competition as world No. 1. To be honest, I was feeling some pressure," Woo said after clinching his title Sunday.

"I was quite nervous," Woo admitted. "But I trusted the work I'd put in with my coach, Kim Do-kyun. I tried to stay as calm as possible."

Woo soared over 2.31m in that third attempt and then cleared 2.34m in his first try. No one was able to match that Sunday.

"I still can't believe what just happened here," Woo said. "I've been talking all along about becoming the first (to win a world title). It's incredible to become the first Korean to win at such a major event."

Woo, 25, has had to overcome more than nerves to reach this point. 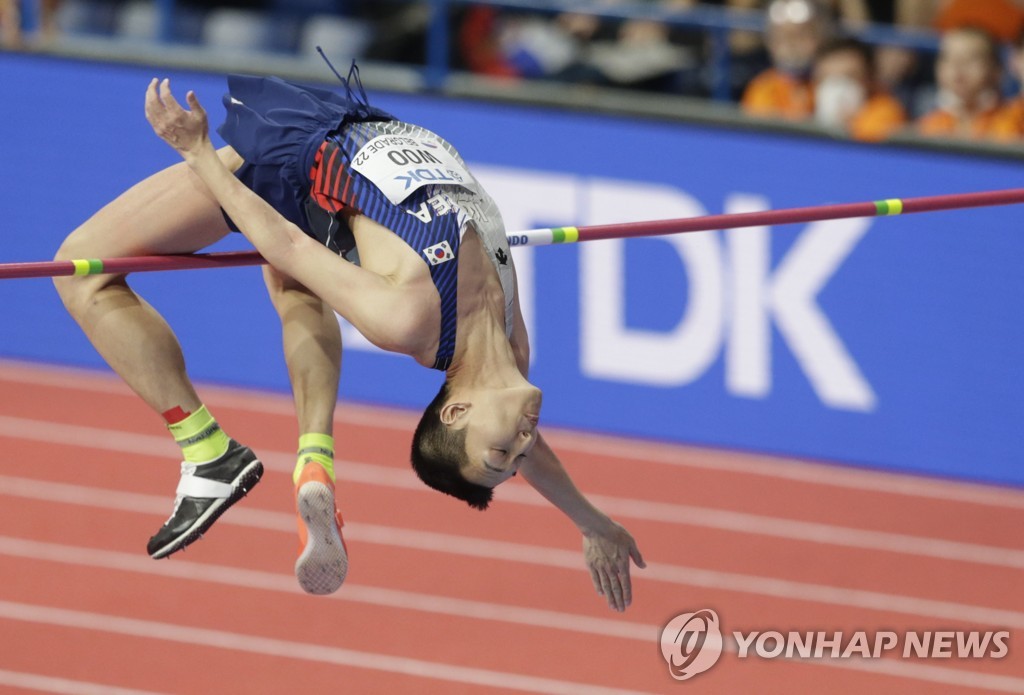 His right foot is smaller than his left foot, as a result of an accident he'd suffered when he was eight years old. At 188 centimeters, Woo is one of the smaller high jumpers. Among the top-five finishers in Belgrade on Sunday, he was the shortest.

But the always-optimistic Woo didn't let those physical challenges get in the way. He has often talked about how he was lucky not to have injured his left foot, which is his takeoff foot, or he wouldn't even have become a high jumper.

As for having feet with different sizes, Woo said, "I used to have a little trouble with balance, but I've worked hard at correcting it, and it's no longer an issue."

Woo has long looked up to another smallish high jumper, the 2004 Olympic champion Stefan Holm. At 181 centimeters, the Swede great is even shorter than Woo, but he retired with that Olympic gold plus four world indoor titles and one world outdoor silver medal.

Woo had his "pinch me" moment when Holm presented him with the gold medal during Sunday's ceremony.

"I'd seen Holm give an interview beforehand, and so I was wondering if he'd be around for the medal ceremony," Woo said. "And there he was, presenting the medals. It was unbelievable. To get the gold medal from Holm and to hear the national anthem, I will never forget this for the rest of my life." 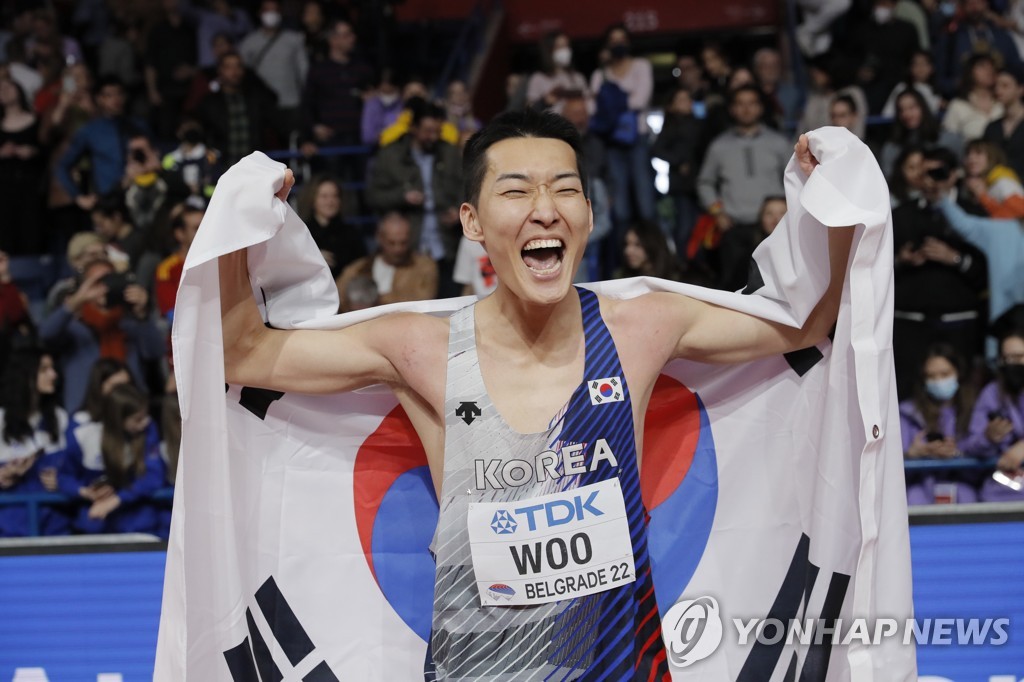 Woo had come up 2 centimeters short of a medal at the Tokyo Olympics last year, as he finished fourth. It was still the best Olympic performance by a South Korean in any track and field event.

With the indoor world title in his bag, Woo will go for an outdoor medal at the World Athletics Championships in Eugene, Oregon, in July. It will be followed by the Asian Games in Hangzhou, China, in September. Woo is the reigning silver medalist in the Asian competition.

Woo also allowed himself to look further down the road to the 2024 Paris Olympics. Mutaz Essa Barshim of Qatar and Gianmarco Tamberi of Italy, who shared a gold in Tokyo, will be well into their 30s by then.

"I will still be in my 20s in Paris. I am going to go for the gold medal," Woo said. "I know there are some great athletes out there. I may have won here this time, but you never know who's going to step up next. My job is to keep working hard and prepare as well as I can." 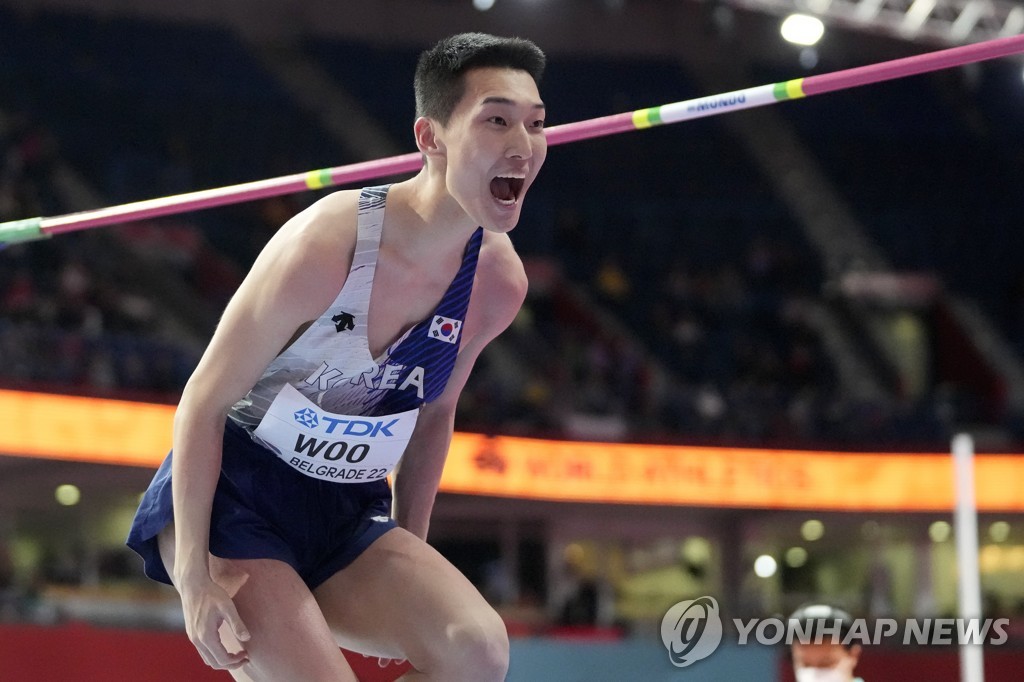