SEOUL, March 21 (Yonhap) -- North Korea has mobilized more than 6,000 troops in preparation for a possible military parade at an airport in Pyongyang, a Seoul official said Monday, following a media report on the massing of such personnel there.

The troop mobilization at the Mirim airport came amid a view that Pyongyang may hold a major parade in time for the 110th birth anniversary of leader Kim Jong-un's late grandfather and national founder Kim Il-sung on April 15.

"There has been a media report of about 6,000 troops having gathered, and our assessment at this point is that the number has risen more than that," the military official told reporters on condition of anonymity.

The official added there has not been any "notable" change in the North's preparations for the possible military parade that Seoul and Washington have been watching over the past weeks.

Citing satellite imagery from Planet Labs, the Voice of America reported last week 20 groups -- each consisting of up to 300 troops -- were spotted preparing for an apparent military parade at the Mirim airport.

Speculation has continued that the reclusive regime could use a military parade as an occasion to show off its key weapons systems as it did during its major national holidays or anniversary events. 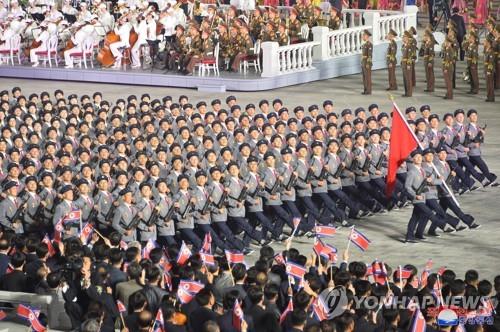