SEOUL, March 22 (Yonhap) -- South Korea and Turkey on Tuesday checked the outcome of their free trade agreement that went into effect nine years ago and discussed ways to further deepen trade and investment ties within the framework, Seoul's industry ministry said.

The matter was discussed during the director-level meeting of the Korea-Turkey FTA joint committee, the fifth of its kind, which was held via teleconferencing and brought together some 20 trade officials from the two sides.

Since the FTA came into force in May 2013, their trade volume has surged 58 percent from US$5.22 billion in 2012 to $8.26 billion last year, according to the Ministry of Trade, Industry and Energy.

South Korea's exports of auto parts to Turkey, a key export item, rose 25.3 percent to $396 million, and those of pharmaceutical goods grew more than sixfold to $367 million.

Seoul's purchase of clothing, as well as aviation and auto parts, from Turkey also jumped significantly, leading to the overall growth in imports from $600 million in 2012 to $1.2 billion last year, the ministry said.

The Seoul government asked for Turkey to investigate the matter fairly by giving the companies enough opportunities to explain themselves, according to the ministry.

"We will continue effort to implement the FTA as agreed upon and to resolve related issues for our companies so as to further boost bilateral trade and investment in a mutually beneficial manner," ministry official Yang Gi-uk said. 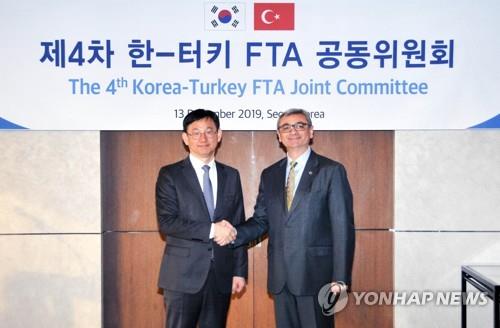