According to the report by the Ministry of Gender Equality and Family, 160, or 10 percent, out of 1,601 high-level civil servants in the central government were women as of the end of last year, up from 8.5 percent recorded a year ago.

High-ranking officials refer to civil servants ranked second or above in the nation's nine-grade civil service system. The nation's officialdom is classified in nine grades, with grade one being the highest.

But the report noted that South Korea's percentage is far lower than those of other member countries of the Organization for Economic Cooperation and Development (OECD). The United States marked 37.1 percent in the portion of high-level female officials in the government as of 2020, while Britain posted 42 percent and Germany 32.4 percent.

The gender ministry said female officials in the central government's middle-ranking posts accounted for 24.2 percent last year, up from 17.5 percent in 2018.

The female proportion in the policy-making positions in public institutions rose to 22.5 percent last year from 17.9 percent three years earlier. 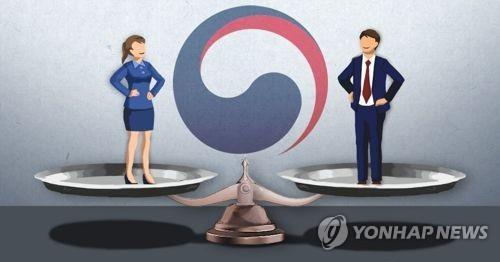