SEOUL, March 22 (Yonhap) -- Eastar Jet Co., a South Korean low-cost carrier, said Tuesday it has graduated from the court-led debt-rescheduling program in one year after it was placed under court receivership amid the COVID-19 pandemic.

Eastar applied for court receivership in January 2021 as it had failed to find a strategic investor since July 2020, when Jeju Air Co., the country's biggest budget carrier, scrapped its plan to acquire Eastar amid the pandemic. 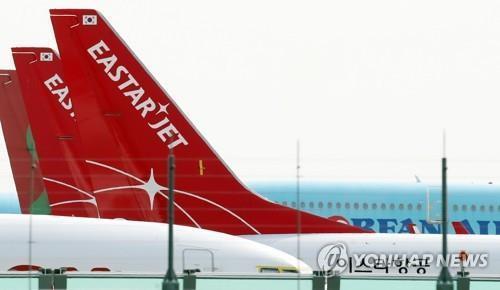 Eastar has yet to receive air operator certificate (AOC) approval from the transport ministry for flight resumption.

Upon AOC approval, the company aims to initially resume flights on the Gimpo-Jeju route in April or May.

Eastar, a China-focused carrier, currently has three B737-800 chartered planes, sharply down from 23 aircraft before the pandemic hit the airline industry two years ago. The 23 planes served a total of 38 domestic and international routes before the pandemic.

Eastar has suspended most of its flights on domestic and international routes since March 2020, and its AOC became ineffective in May.

Most of the LCCs have suffered snowballing losses since 2019, as travel demand was affected by the pandemic, as well as diplomatic and trade disputes with China and Japan, respectively.