SEOUL, March 22 (Yonhap) -- An upcoming government reform envisioned by President-elect Yoon Suk-yeol is centered on diminishing the power of the presidential office and strengthening the Cabinet's discretionary power to end the controversial imperial presidential system, officials close to him said Tuesday.

Yoon, a prosecutor-turned-politician, is said to have set the White House as a role model for not only the layout of his new presidential office but also the way the presidential secretariat and the Cabinet work.

The most noticeable change is expected to be the disappearance of the senior presidential secretary system from Yoon's presidential office, the officials said. 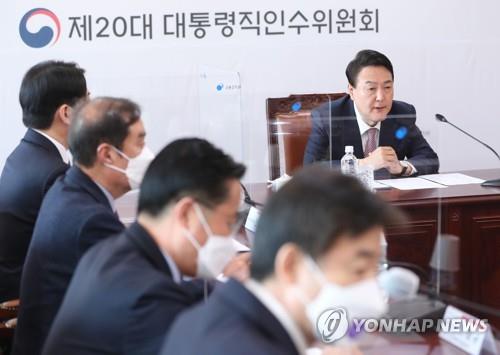 Instead, the ideal form of government envisaged by Yoon is one where ministers and vice ministers in each government ministry essentially work as the president's secretaries, they noted.

"The current structure, in which ministers and vice ministers report to senior presidential secretaries, who subsequently report to the president, is strange," said an official at Yoon's transition team.

"Ministers and vice ministers should each become secretaries reporting directly to the president."

In this context, the incoming government will strongly consider introducing the U.S.-style concept of secretary to the ministerial position, the official added.

"The authoritative, power-oriented and command-like feeling from the word of senior presidential secretaries will be adjusted horizontally," the official stressed.

Yoon is said to be strongly determined to push for a sweeping reform of government organization. His transition team held the first official meeting of the presidential office reform task force Monday. At the meeting also attended by senior officials from the finance and interior ministries, problems of the existing presidential office, Cheong Wa Dae, and alternatives were broadly discussed, according to reports.

Yoon has vowed to relocate the presidential office from Cheong Wa Dae to the defense ministry compound in Yongsan, central Seoul, to depart from imperial presidency. Yoon said he wants to work closely with his secretaries, advisers and the press in one building, unlike Cheong Wa Dae, where individual buildings are quite far apart.

But President Moon Jae-in has put the brakes on Yoon's relocation scheme, citing a possible security vacuum from the defense ministry.

Regardless of the situation, however, Yoon's transition team is determined to further accelerate discussions on overhauling Cheong Wa Dae, the officials said.

Meanwhile, a number of public-private joint committees to be set up within Yoon's presidential office are expected to play a role in presenting broad national agendas to be implemented by each ministry, they noted.