SEOUL, March 22 (Yonhap) -- The government decided to increase the capacity of public crematoriums across the country to cope with the rising death toll from the COVID-19 pandemic, officials said Tuesday.

The Central Disaster and Safety Countermeasures Headquarters announced daily furnace operations at all 60 public crematoriums nationwide will grow to seven times per unit, effective until mid-April.

Last week, the government increased daily furnace operations from an average 3.3 times per unit to seven times in metropolises and five times elsewhere. 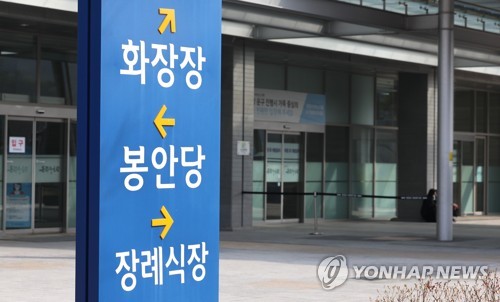 The authorities have decided to extend the turnover guideline for metropolises to cover all facilities across the country as the nation battles a surge in virus deaths this month amid the spread of the highly transmissible omicron variant.

"The number of bodies that cremation facilities can handle a day increased from about 1,000 to about 1,400, but there are still large gaps among regions," an official of the headquarters said.

"To address the problem, we decided to apply the furnace operational guideline of seven times to all crematoriums across the country," he said.

The daily capacity of public cremation facilities had risen from 1,044 cases as of March 4 to 1,424 as of Monday, according to the headquarters.