The septet won best music video for its 2021 megahit single "Butter" and best fan army for its international fandom ARMY during the awards ceremony held in Los Angeles on Tuesday (U.S. time).

It marks the third consecutive year for the group to win in the best music video category, following 2020 for "Boy With Luv" and 2021 for "Dynamite."

The honor for the best fandom went to BTS' ARMY for the fifth year in a row.

"Your love and support brought us the awards, and it means everything to us that we have ARMY," the group said in an acceptance speech via video link. "We have always been together, and ARMY, you're always amazing. You are the best. Thank you." 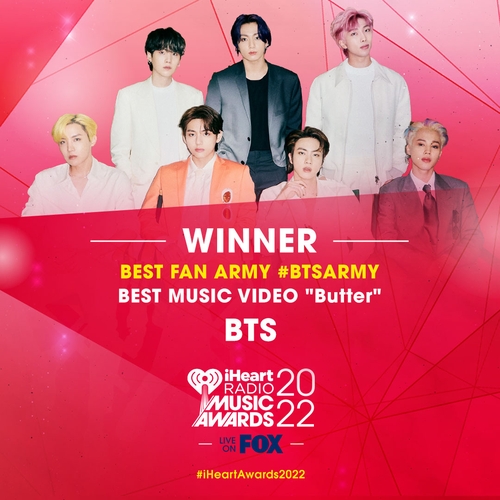 BTS was also nominated for best duo or group of the year, but the honor went to Silk Sonic, the super duo made up of pop star Bruno Mars and Anderson .Paak.

Founded by U.S. online radio broadcaster iHeartRadio in 2014, the iHeartRadio Music Awards has been held every year to recognize the most popular artists and music over the past year.

The K-pop supergroup BTS is set to perform at the 64th Grammy Awards in Las Vegas on April 3. It was also nominated for best pop duo or group performance.

The band will then hold four live concerts at Allegiant Stadium in the same city on April 8-9 and 15-16.