Investor sentiment was buoyed by the strong performance of U.S. shares, as traders digested concerns over faster-than-expected interest rate hikes by the U.S. central bank to rein in inflation.

"The Federal Reserve's hawkish stance is not quite new so investors appear to have brushed it off," Huh Jae-hwan, an analyst of Eugene Investment & Securities, said.

Steel shares gathered ground to lead the overall gains, as the ongoing crisis surrounding Ukraine has taken a toll on European steelmakers.

Financials also ended in positive terrain amid expectations for higher interest rates and the easing of lending regulations by the incoming government.

Speculation has mounted that Ahn could be named the first prime minister of the incoming Yoon Suk-yeol administration. Ahn, an entrepreneur-turned-politician, dropped out of the presidential race at the last minute to declare his support for Yoon.

Bond prices, which move inversely to yields, closed lower. The yield on three-year Treasurys added 2.7 basis points to 2.426 percent, and the return on the benchmark five-year government bond rose 1.5 basis points to 2.646 percent. 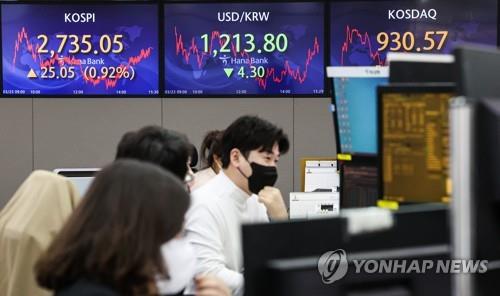