SEOUL, March 23 (Yonhap) -- The transition team of President-elect Yoon Suk-yeol is working to set up a phone call between Yoon and Chinese President Xi Jinping this week, an official said Wednesday.

The call would mark a departure from past Chinese practice, as Chinese leaders have typically held phone calls with South Korean presidents shortly after they took office, not before.

"The two sides are in talks to arrange a phone call," a transition team official told Yonhap News Agency.

Xi sent a congratulatory message to Yoon upon his election, saying South Korea is a "close neighbor and important cooperation partner."

On Wednesday, he was scheduled to speak with Vietnamese President Nguyen Xuan Phuc.

Yoon has voiced hope for deeper ties with China but strongly suggested he will not bow to Beijing's wishes if they do not serve the national interest.

His choice of foreign leaders for phone calls sparked speculation that he was signaling his intention to align with Washington in the face of an increasingly assertive Beijing. 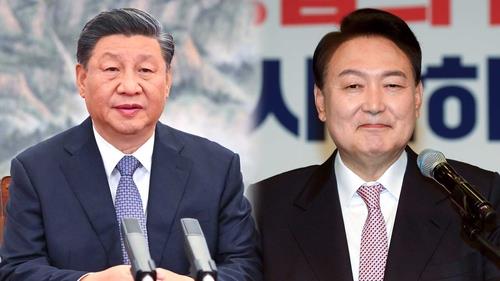