SEOUL, March 23 (Yonhap) -- Brave Girls said Wednesday its latest album, "Thank You," is an ode to its devoted fans, who made it possible for the K-pop group to achieve viral success with "Rollin'" last year after more than 10 years of obscurity.

"We received so much love last year but had no proper chance to express appreciation for this. That's why we named the album and its title track 'Thank You,'" the group said during an online media showcase in Seoul for its sixth EP, "Thank You." "Fans say they thank us for holding out, but we wanted to say we were able to be there because of you and that we thank you."

In March 2021, the quartet, which was on the verge of disbanding as they remained outside of the spotlight throughout its 10-year-long career, suddenly shot to fame with its 2017 single "Rollin'" after a fan-made video of the band performing the song live at various events along with witty comments from its fans, mostly conscripted soldiers, went viral on YouTube.

The song then dominated various music charts four years after it came out, and the band began to appear on numerous TV and radio shows. With the newfound success of the group, other songs, like "We Ride" (2020), also climbed the charts as well. 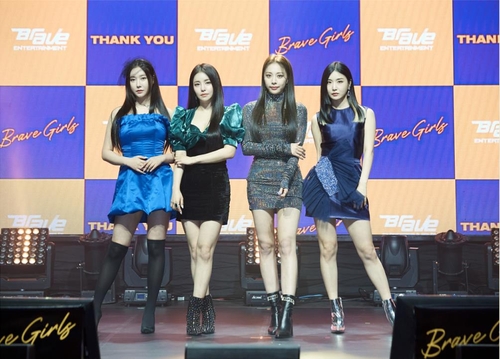 The new EP marks the band's first release in about eight months, after "After 'We Ride'" in August 2021. It is a repackaged version of the group's fifth EP, "Summer Queen," released in June, soon after the group achieved viral success with "Rollin'," and whose lead track, "Chi Mat Ba Ram," also became a hit.

"Thank You" consists of a total of five tracks, including the title track, "You and I," "Love is Gone" and "Can I Love You."

The lead single is a funky, retro-pop genre song with lyrics expressing thanks to those who have been with the quartet for a long time without giving up.

"Last year, we were loved so much and experienced something miraculous," Yujeong said. "We expressed our gratitude for this in this song."

The group originally planned to hold the showcase on March 14, the day when the album dropped.

But the event was rescheduled, as its three members, Minyoung, Yujeong and Eunji, tested positive for COVID-19. 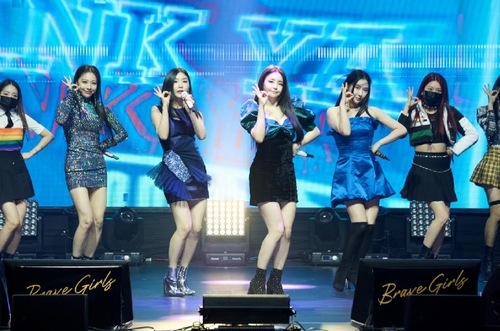 Brave Girls also announced it will compete on the second season of local cable channel Mnet's popular girl group competition show "Queendom." Other contestants include K-pop groups such as LOONA, Kep1er and VIVIZ.

"Our goal is to show how we grow through the competition show," Eunji said. "We decided to appear in the show, taking it as a chance to show ourselves more to global K-pop fans. It's a bit difficult to simultaneously prepare for the appearance and our comeback, coupled with COVID-19. We're working hard."