(ATTN: UPDATES throughout with details; CHANGES headline)
By Lee Haye-ah

Kim Eun-hye did not give the exact date due to diplomatic protocol but claimed it was unprecedented for Xi to speak with a foreign leader before they took office. 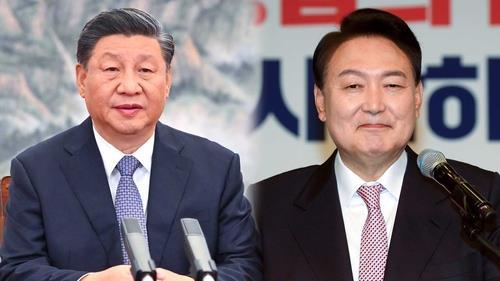 "I understand the need for a phone call was conceived in accordance with our close cooperation with China on Asia-Pacific and Korean Peninsula issues, and the new South Korea-China relations to be realized by the Yoon government at a time when North Korea is raising military tensions by threatening to lift its moratorium on nuclear and ICBM tests," she said.

"North Korea has already launched missiles some 10 times this year," she added.

China is North Korea's main ally and economic benefactor, and its cooperation is key to getting Pyongyang to dismantle its missile and nuclear weapons programs.

Xi sent a congratulatory message to Yoon upon his election, saying South Korea is a "close neighbor and important cooperation partner."

Yoon has voiced hope for deeper ties with China but strongly suggested he will not bow to Beijing's wishes if they do not serve the national interest.

His choice of foreign leaders for phone calls sparked speculation that he was signaling his intention to align with Washington in the face of an increasingly assertive Beijing.