The Seoul shares got off to a weak start, tracking overnight Wall Street losses, and had tumbled as much as 1.04 percent, as oil prices soared due to supply disruptions from a crucial pipeline on Russia's Black Sea coast.

But some of the early losses were recovered on strong individual buying, with individual investors buying a net 675.16 billion won worth of stocks. Foreigners and institutions dumped shares worth 473.55 billion won and 223.31 billion won, respectively.

"Looming additional sanctions by the U.S. against Russia and more hawkish comments by Federal Reserve officials on rate hikes have affected investor sentiment. But part of those issues have already been reflected to limit the fall," Samsung Securities analyst Kim Yong-koo said.

Tech and bio shares ended lower to drag down the index.

Market bellwether Samsung Electronics lost 0.99 percent to 69,800 won, after its shares worth $1.1 billion were sold in a block deal, which would help the owner family raise cash to pay a tax bill.

But chemicals and energy shares ended in positive territory.

The local currency closed at 1,218.80 won against the U.S. dollar, down 5.0 won from the previous session's close.

Bond prices, which move inversely to yields, closed lower. The yield on three-year Treasurys added 2.9 basis points to 2.455 percent, and the return on the benchmark five-year government bond rose 1.5 basis points to 2.661 percent. 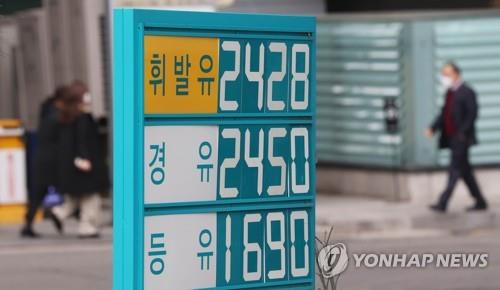