The end to the moratorium, a symbol of budding trust with Washington, is a highlight of Pyongyang's recent provocative streak, apparently aimed at heaping pressure on Washington to show flexibility in their stalled nuclear talks, analysts pointed out.

The recalcitrant regime declared the moratorium in April 2018 amid brisk Seoul-brokered diplomacy that led to the first-ever summit between the U.S. and the North in Singapore in June of the same year.

The Moon administration had touted the moratorium as a key product of its peace initiative that has stalled amid the North's continued missile tests, its hardening rhetoric and refusal to engage in talks.

Soon after the North's ICBM launch, Moon held an emergency National Security Council session and "strongly condemned" the firing as a "serious threat to the Korean Peninsula and beyond," according to the presidential office Cheong Wa Dae.

The missile flew some 1,080 kilometers at a top altitude exceeding 6,200 km, according to Seoul's Joint Chiefs of Staff (JCS). It is thought to have been fired at a steep angle, which means that it would have flown far longer if shot at a normal one. 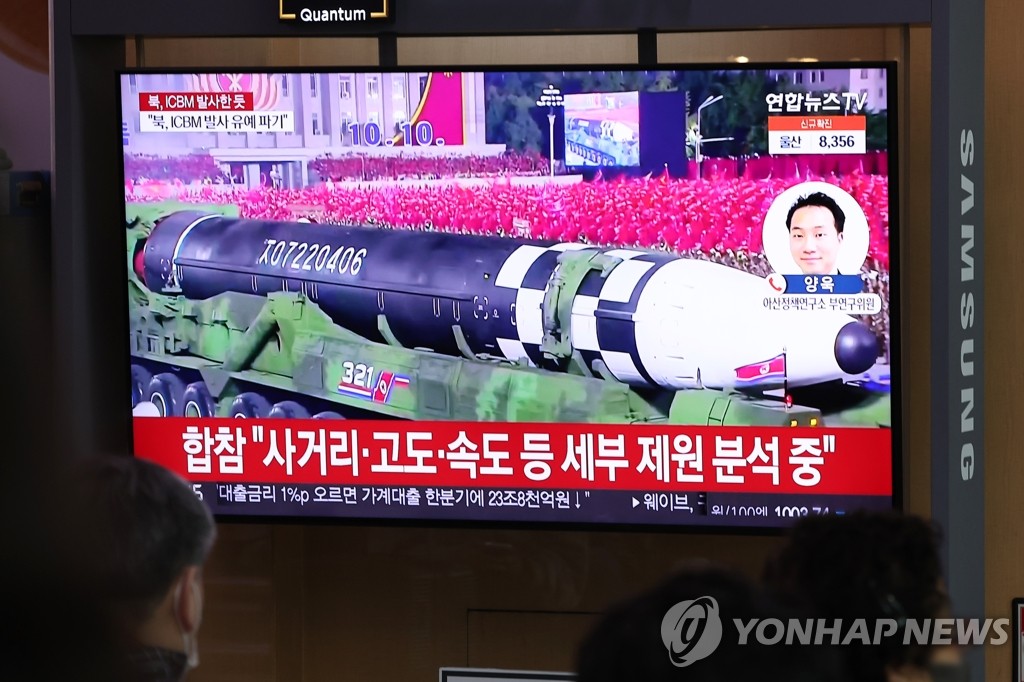 In a quick countermeasure, the South's military test-fired high-end missiles from air, sea and ground to underscore what the JCS called South Korea's "capabilities and resolve to immediately respond and retaliate."

The international community is also expected to seek to hold the North accountable for the violation of U.N. Security Council (UNSC) sanctions banning its launches using ballistic missile technology.

The U.S. and other like-minded countries will likely push for a UNSC session to discuss additional sanctions and ways to enforce existing ones more strictly.

It remains uncertain, however, whether China and Russia, the North's traditional partners and veto-wielding UNSC members, would accede to any meaningful punishment.

The demise of the years-old ICBM testing moratorium was foreordained.

During a politburo meeting of the ruling Workers' Party in January, Pyongyang decided to consider restarting "all temporally-suspended" activities in a veiled threat to suspend the moratorium on strategic weapons tests.

On Feb. 27 and March 5, the North carried out what it claimed to be a "reconnaissance satellite" development test. But the South and the U.S. accused the North of having conducted two new ICBM system tests ahead of a "full-range" launch.

Last Wednesday, the North launched an apparent long-range rocket, but it is presumed to have exploded in midair soon after liftoff.

Analysts said that those launch tests were part of the North's typical tactics to attract attention from Washington -- now preoccupied with the armed conflict between Ukraine and Russia -- and partly to highlight its military presence ahead of the launch of a new government in Seoul on May 10.

Concerns have lingered that the North could try to ratchet up tensions especially as the South is embracing a conservative president to replace the liberal Moon.

Thursday's launch is unlikely to be a climax of its provocative trajectory, Ryu Seong-yeop, a researcher at the Korea Research Institute for Military Affairs, said.

"The next step would be firing it at a standard angle so that it can fly over the Japanese archipelago and splash into the Pacific waters," Ryu said.

Seoul and Washington have been anxiously watching Pyongyang's push for the ICBM development as it forms the so-called nuclear triad consisting of ICBMs, nuclear bombers and submarine-launched ballistic missiles.

The North has been seen doubling down on the ICBM program to keep American forces at bay in case of a conflict on the Korean Peninsula, thus weaken its security commitment to the South and ultimately decouple the Seoul-Washington alliance, observers said.

The North's ICBM drive is expected to give an impetus to President-elect Yoon's campaign for "peace through strength."

His transition team condemned the North's latest missile firing as a "significant provocation that threatens our security" -- a statement that foreshadowed the next government's tougher policy stance on Pyongyang.

During a policy report earlier this week, Seoul's defense ministry reportedly told Yoon's transition team that it is looking into an option of reactivating the "Extended Deterrence Strategy and Consultation Group (EDSCG)" to discuss the issue of U.S. strategic asset deployment.

The EDSCG was launched in 2016 to discuss ways to enhance the credibility of America's extended deterrence to South Korea -- U.S.' stated commitment to employ a full range of its military assets, nuclear and conventional, to defend its Asian ally.

The North's continued provocations could also reinforce Yoon's rationale on the need to strengthen missile defense. Among his key security pledges was to deploy more THAAD anti-missile systems to South Korea.