Yoon made the call during a 25-minute phone conversation with Xi a day after North Korea test-launched an intercontinental ballistic missile, raising tensions in the region to a new high.

"Regarding North Korea's ICBM-class missile launch yesterday, President-elect Yoon Suk-yeol stressed that the people are greatly concerned over the rapid escalation of tensions on the Korean Peninsula and in the region caused by North Korea's serious provocation," Kim Eun-hye said in a written briefing.

"(Yoon) called for the two countries to cooperate closely to realize the complete denuclearization of North Korea and for the stable management of the political situation on the Korean Peninsula," she said. 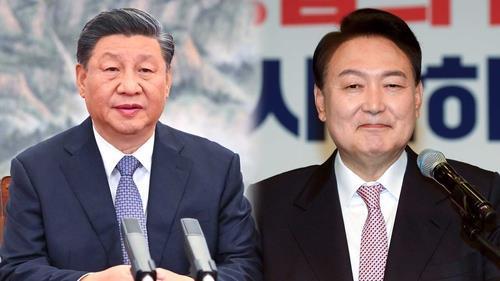 In previewing the call, Kim had said it would be the first time for Xi to speak with a South Korean leader before they took office, suggesting the high importance Beijing placed on establishing a close relationship with the incoming government.

During the call, Yoon and Xi agreed to communicate closely to set up a meeting between them at an early date after Yoon's inauguration on May 10, she said.

North Korea earlier confirmed it successfully test-fired a new ICBM, called the Hwasong-17, on Thursday at the direct order of its leader Kim Jong-un, scrapping a self-imposed moratorium on long-range missile testing that had been in place since late 2017.

China is North Korea's main ally and economic benefactor, and its cooperation is key to getting Pyongyang to dismantle its missile and nuclear weapons programs.

Xi sent a congratulatory message to Yoon upon his March 9 election, saying South Korea is a "close neighbor and important cooperation partner."

Xi congratulated Yoon again on Friday and Yoon thanked him while congratulating the Chinese president on the successful hosting of the National People's Congress earlier this month.

"During today's phone call, President-elect Yoon and President Xi agreed to work to develop new South Korea-China relations on the occasion of the 30th anniversary of establishing diplomatic ties," Kim said, referring to the milestone this year.

"President-elect Yoon also said he hopes to work together with President Xi going forward to advance South Korea-China relations with the spirit of mutual respect and cooperation," she said.

Xi responded by characterizing the two countries as "close neighbors that cannot move away," saying the two sides should work to bring benefits to their countries and their peoples by promoting stable and long-term development in bilateral ties, according to the spokesperson.

Yoon and Xi agreed on a wide range of issues, including activating high-level strategic communication to properly manage pending issues between the two countries and expand practical cooperation on supply chain issues, health, climate change, fine dust and other environmental matters, and culture.

"They shared the view that reducing the distance between the hearts of the two peoples is an important foundation for the development of bilateral relations, and agreed to work together to that end," Kim said.

Moreover, the two agreed to cooperate actively on regional and global issues in light of the two countries' increased statuses in the international community over the last 30 years, she said.