SEOUL, March 27 (Yonhap) -- South Korea and a group of Arab countries will resume talks for their free trade deal this week after a 13-year hiatus in a move to forge deeper economic ties, Seoul's industry ministry said Sunday.

South Korea and the Gulf Cooperation Council (GCC) will began the fourth round of official talks for a bilateral free trade agreement (FTA) in Seoul on Monday for a four-day run, according to the Ministry of Trade, Industry and Energy.

South Korea and the GCC agreed to push for a trade agreement in 2007 and had three rounds of talks between 2008 and 2009. But the negotiations have since stalled after the council announced the suspension in 2010.

"The Gulf region is a crucial market for South Korea given its population, income and growth potential. A free trade deal with the resources-rich GCC nations will not only serve as a chance to boost trade, investment and overall economic cooperation but also help ensure our stable supply chains," the ministry said in a release.

Trade volume between the two sides came to US$46.6 billion in 2020, according to government data. 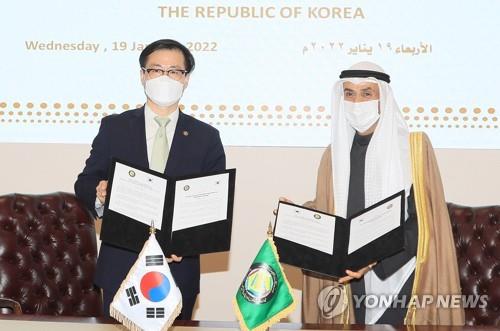