SEOUL, March 27 (Yonhap) -- South Korea and the United States regard North Korea as having disguised its launch of an existing intercontinental ballistic missile (ICBM) last week as that of a new larger one, informed sources said Sunday.

The allies believe that the North again tested a Hwasong-15 ICBM on Thursday, the same type it fired in late 2017, according to the sources. The North has publicly claimed success in the launch of a Hwasong-17 missile.

Their intelligence analysis suggested that like the Hwasong-15, the ICBM in question had two engine nozzles, whereas the Hwasong-17 has four nozzles. The engine combustion time of the first-stage rocket was also similar to that of the Hwasong-15.

The analysis was based on data from the allies' intelligence assets, including from a satellite equipped with infrared thermal sensors. 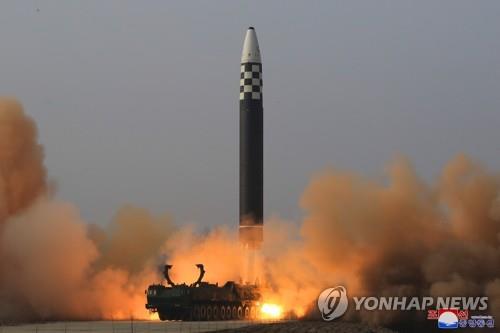 It represented progress given that the Hwasong-15 missile flew some 960 km at a top altitude of around 4,500 km in the 2017 launch.

But the military authorities here downplayed the projectile fired last week as an apparent Hwasong-15 missile with a lighter warhead designed to appear to have flown like the longer-range Hwasong-17.

Questions over the North's claim about its latest ICBM launch emerged as the North's photo of the latest launch showed the missile shot up in a clear blue sky in Pyongyang though it was cloudy in the North Korean capital at the time of the launch.

Observers said the North might have used a photo of an earlier ICBM test in its state media report on the purported Hwasong-17 launch.
(END)