SEOUL, March 28 (Yonhap) -- President-elect Yoon Suk-yeol said Monday that South Korea, the United States and Japan should work closely together to convince North Korea that it has nothing to gain from its nuclear weapons.

Yoon made the remark during a meeting with Japanese Ambassador to Seoul Koichi Aiboshi, days after the North successfully test-fired a massive intercontinental ballistic missile last week in its biggest weapons test since 2017.

"Closer cooperation will be needed between South Korea, the U.S. and Japan to make North Korea convinced that it has nothing to gain from nuclear (weapons)," Yoon was quoted as saying by his spokesperson Kim Eun-hye.

Aiboshi responded that North Korea's nuclear and missile provocations are not only an enormous threat to the security of South Korea and Japan but also a serious challenge to the international community, and that he hopes for close cooperation with Seoul for stability and prosperity in East Asia, Kim said.

During the meeting at his office, Yoon said communication is the key to resolving differences and that he believes relations with Japan can be improved if the two countries take a future-oriented approach to difficult issues. 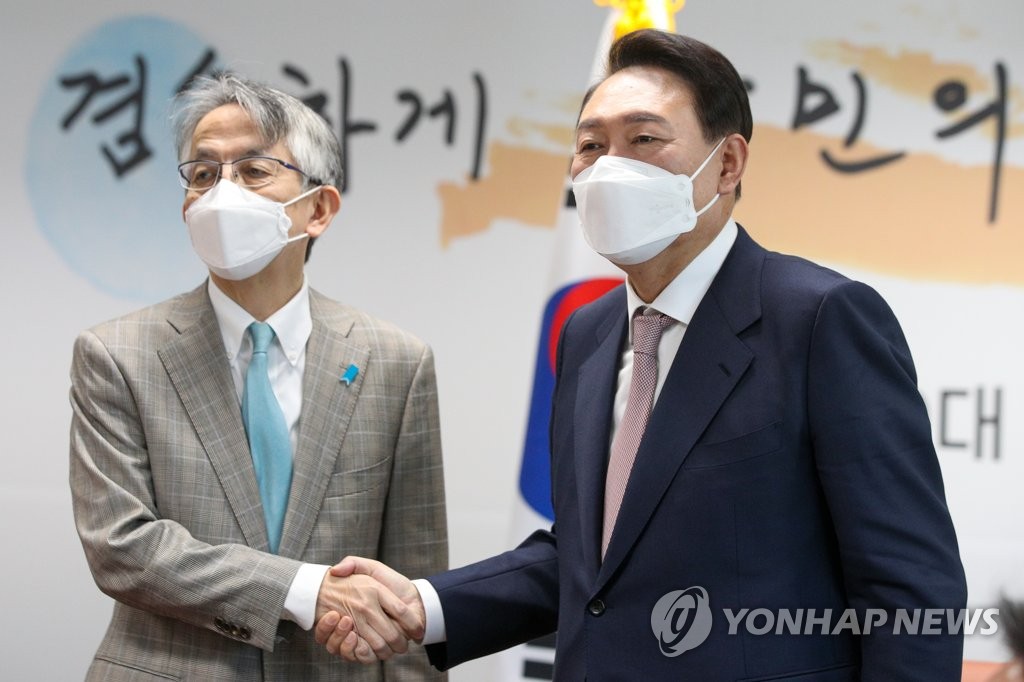 "If the two countries' political leaders, government officials and peoples push the bilateral relationship forward in a future-oriented manner, even if other issues may seem difficult, they will be resolved well through dialogue," he said.

"I think South Korea-Japan relations must be improved in a future-oriented way and urgently restored to a good relationship as before, and I think both sides will need to make a lot of effort," he added.

His comments come as bilateral ties have suffered from historical disputes stemming from Tokyo's 1910-45 colonial rule of the Korean Peninsula.

The meeting was initially scheduled for March 17 but postponed after Aiboshi tested positive for COVID-19.

During the call, he stressed the importance of resolving pending issues between the two countries in a rational manner in line with their mutual common interests. He also expressed hope that South Korea, the United States and Japan will further strengthen coordination on Korean Peninsula issues once he takes office.

Aiboshi congratulated Yoon on his election win and said he was pleased with how the phone conversation went.