SEOUL, March 28 (Yonhap) -- South Korean stocks closed nearly unchanged Monday, as investors remained wary about the uncertainties related to the Russian invasion of Ukraine and the hawkish stance by the U.S. Federal Reserve. The Korean won fell against the U.S. dollar.

Trading volume was moderate at about 755 million shares worth some 9.7 trillion won (US$7.9 billion), with losers outnumbering gainers 428 to 425. 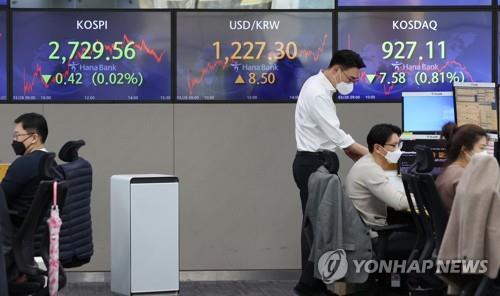 Stocks got off to a lackluster start as the Ukraine-Russian tensions continue to stoke concerns about high commodity prices and inflation growth.

Investors are also bracing for the Fed's aggressive policy tightening, with multiple key officials slated to speak later this week.

Investors are expecting the Fed may mark up its policy rates sharply for the rest of 2022 to vent the high-flying inflation pressure.

The local currency closed at 1,227.3 won against the U.S. dollar, down 8.5 won from the previous session's close.

Bond prices, which move inversely to yields, closed lower. The yield on three-year Treasurys soared 24.2 basis points to 2.747 percent, and the return on the benchmark five-year government bond surged 25.7 basis points to 2.970 percent.