SEOUL, March 28 (Yonhap) -- Some volunteer soldiers from South Korea were deployed in Ukrainian front-line units fighting against Russia, an official from Ukraine's military has said.

Damien Magrou, a spokesperson for the International Legion for the Defense of Ukraine, confirmed the activities of South Koreans during a recent interview with Yonhap News Agency.

Ukraine has claimed that it established the Ukrainian foreign legion on Feb. 27, days after Russia's invasion, and over 20,000 people from 52 countries have joined the brigade-level unit. 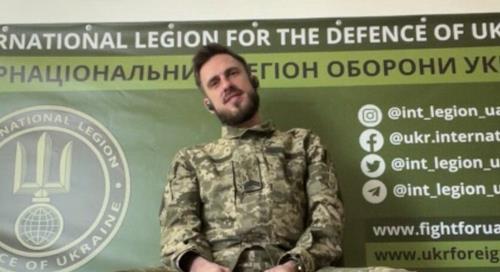 It is the first interview the International Legion has done with South Korean media.

Magrou said volunteers from many countries, including South Korea, have joined the international brigade but refused to disclose the number of volunteers by nationality.

He declined to confirm the location of individual foreign volunteers for their safety and operational security, but said that Rhee Keun, a former South Korean Navy special warfare officer-turned-YouTuber, has not yet been deployed to a front-line unit.

Rhee has drawn media attention after leaving for Ukraine in early March to join the war against Russia.

South Korea's foreign ministry has warned of possible prison sentences against its citizens seeking to join Ukraine's military to fight against Russia's invasion without due approval from the government. It said on March 18 that nine South Koreans, including Rhee, were staying in Ukraine.

Three of the nine Koreans have returned home and six are still in the European country, the ministry said.

The government has yet to locate two out of the six in Ukraine, Foreign Minister Chung Eui-yong said in a national assembly meeting.
(END)