Samsung is estimated to log 13.89 trillion won (US$11.3 billion) in operating profits in the three months ending March 31, up 38.64 percent from a year ago, while SK hynix is expected to top 3.1 trillion won, up 137.08 percent, according to a survey by Yonhap Infomax, the financial data firm of Yonhap News Agency, on local brokerage firms.

Samsung's first-quarter sales are forecast to come in at 75.2 trillion won, exceeding 70 trillion won for the third consecutive quarter. It is up 15.02 percent from a year earlier.

SK hynix is expected to post 11.5 trillion won in quarterly sales, up 36.36 percent from the same time last year and surpassing 10 trillion won for the first time. 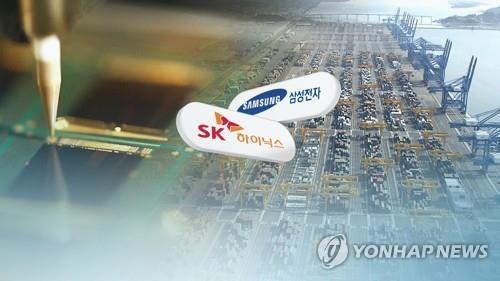 The rosy forecasts both for Samsung and SK hynix came in spite of difficult external business conditions, ranging from volatile raw material costs spurred by Russia's invasion of Ukraine to the global supply chain disruption.

The two companies said there was no immediate impact from the war in Ukraine on their chip production thanks to "diversified sources for materials" and ample inventory of key materials. The two chipmakers, combined, take up more than 70 percent of the global DRAM market.

The positive outlook is supported by a sooner-than-expected rebound in memory chip prices amid the continued shortage of semiconductors and strong demand for DRAM used in servers.

Market researcher TrendForce said prices of DRAM, a volatile memory chip used mostly in computers and servers, could fall up to 13 percent in the first quarter and five percent in the second. But they will rebound starting in the second half, thanks to "the rise in DDR5 penetration rate and the arrival of peak seasonal demand." DDR5 is the next-generation of PC main memory with higher speed and bigger memory.

Supply disruptions of crucial raw materials used in the chipmaking process, such as neon, however, are stoking concerns about higher chip prices down the road.

Prices of industrial-grade neon from China have reportedly risen significantly since the war broke out in Ukraine.

Internally, Samsung is said to have difficulties in improving yield rates of below 5 nm semiconductor process nodes.

At a recent annual shareholders meeting, Samsung Electronics co-CEO Kyung Kye-hyun said, "We have gradually improved and stabilized the process, although it took time to ramp up capacity due to its complexity."

Also, Samsung recently found itself in hot water over its performance-throttling Game Optimization Service in its latest flagship Galaxy S series. Samsung said the feature was designed to extend battery life and prevent excessive heat, but later backed down amid strong protests from users to offer a software update.