(ATTN: UPDATES throughout with details, background; CORRECTS date of call in 2nd para)
By Lee Haye-ah

Yoon made the proposal during a phone call with Zelenskyy on Tuesday, Kim Eun-hye said during a press briefing when asked if she could disclose details of the conversation.

Kim initially said Tuesday that details would not be revealed "as Ukraine is currently in a state of war." 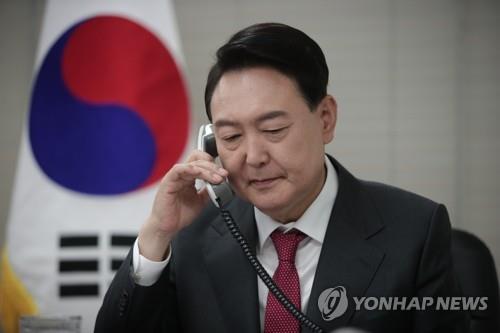 "Fruitful cooperation has large implications in light of what we see daily in Ukraine," she said, referring to Zelenskyy's tweet on the phone call.

Zelenskyy wrote that he thanked the South Korean people for their support for Ukraine and "expressed conviction in further fruitful cooperation."

"President-elect Yoon also expressed his wish for the two countries to meet at an early date after the end of the war for talks on ways to build practical cooperation," Kim said.

"In that sense, President Zelenskyy's tweet and the wishes of President-elect Yoon ... align."

Yoon has previously expressed his support for the Ukrainian people in their fight against Russia's invasion.

On March 2, he met with Ukrainian Ambassador-designate to South Korea Dmytro Ponomarenko as the then presidential candidate of the main opposition People Power Party and promised to do his best to send supplies and basic necessities to the Ukrainian people if the envoy made a request.

He also gave Ponomarenko a letter and a financial donation for the Ukrainian people in a personal capacity.

"It is only natural that the many free nations of the world, including the Republic of Korea, are condemning Russia's invasion, which is a clear violation of international law, and participating in sanctions," Yoon said at the time.