SEOUL, March 30 (Yonhap) -- South Korea's new daily COVID-19 cases rose to over 420,000 Wednesday amid concerns over the continued rise in seriously ill patients and deaths over the fast spread of the highly transmissible "stealth omicron" subvariant.

Wednesday's tally marked a spike from the previous day's 347,554. The daily count shifted to an upturn Tuesday after five days of a constant slide, though the health authorities have said the omicron-driven worst virus wave peaked last week. The number of daily infections soared to as high as 621,197 on March 17.

High infections have pushed up COVID-19 deaths and serious cases.

The country added 432 new COVID-19 deaths Wednesday, which is the second-largest daily figure ever after 469 single-day deaths reported Thursday. The fatality rate stood at 0.12 percent.

The number of critically ill patients rose by 86 to an all-time high of 1,301, the KDCA said. The previous record was set Monday when the figure came to 1,273.

Serious cases rose to above 1,000 earlier this month and have since been above the level. The KDCA said the number of deaths and serious cases could grow further in the coming weeks. 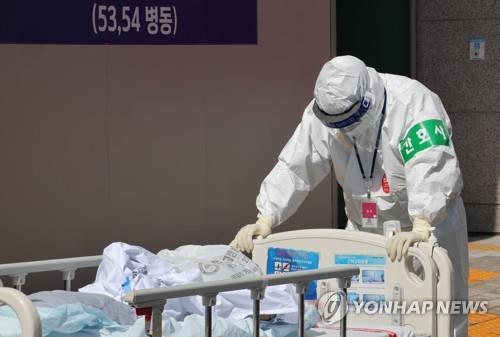 Some 66.4 percent of the hospital beds for critically ill patients were occupied across the country as of Wednesday, down 1.8 percentage points from the previous day, according to the KDCA.

The government came up with a set of measures to strengthen the monitoring and treatment of vulnerable groups, particularly at nursing homes and senior care hospitals.

"If people who are aged 65 and older in nursing homes contracted the virus, we will give them priority in providing treatment at specialized medical centers, even if they only have mild symptoms," KDCA official Park Hyang said.

The government also decided to immediately send COVID-19 patients in senior care hospitals, regardless of their age, to reserved facilities when their conditions deteriorate.

It will also allow a shorter self-quarantine period for workers at nursing homes from the current seven days to three if they test positive but have no symptoms.

So far, it has secured the pills for 962,000 patients, and some 15 percent of the total has been administered, the KDCA said.

Since Saturday, the government has also administered MSD's Lagevrio oral treatment pills after making a contract of purchasing the amount for 242,000 patients.

As of Tuesday, 32.69 million people out of the total population, or 63.7 percent, had received booster shots. The number of fully vaccinated people came to 44.48 million, representing 86.7 percent, the KDCA said.

Starting Thursday, the government will begin administering COVID-19 vaccine shots to children aged between 5 and 11. Around 3.15 million are in this age group, and volunteers will receive Pfizer Inc's vaccine.

Of total infections reported this month, those aged 18 and under accounted for around 24 percent, KDCA data showed. 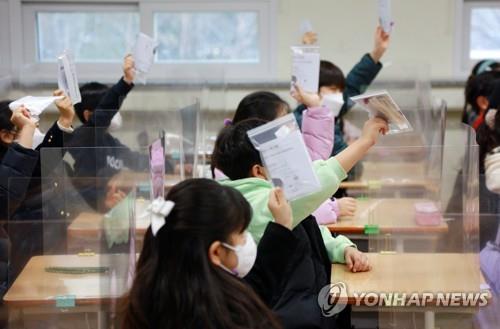 A growing number of local clinics are expected to provide face-to-face treatment to COVID-19 patients, as the government on Wednesday began accepting applications at smaller clinics for the medical service.

The move aims to better support at-home patients and to move on to a fresh medical response system to handle the prolonged pandemic, the KDCA said.

Currently, the government has designated 279 clinics across the country as facilities reserved for at-home patients, but calls have grown for their expansion in line with the surge in total infections and the subsequent rise in patients staying at home.

Eyes are on the government's planned announcement of its decision Friday on whether to adjust current social distancing rules.

The government has relaxed some social distancing rules in efforts to regain normalcy and support small businesses hit hard by the pandemic.

Currently, the government enforces an eight-person cap on private gatherings and an 11 p.m. business curfew, and those curbs are to expire Sunday.

The health authorities have been leery of a possible upturn, as the even more transmissible BA.2 "stealth omicron" subvariant became the dominant strain in the country and continued to have spread fast.

The strain accounted for 56.3 percent of the total infections last week. 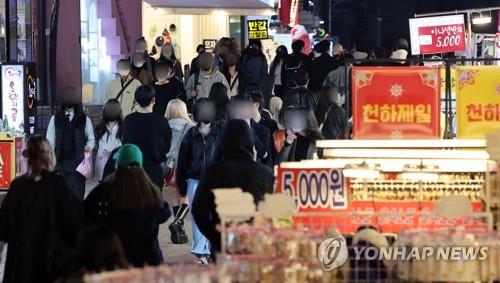