The state-run Agency for Defense Development conducted the first such test at a testing site in Taean, 150 kilometers southwest of Seoul, to confirm capabilities of the homegrown space launch vehicle, according to the ministry.

The launch came after the North's 12 known rounds of missile and other launches this year, including what the North claimed to be "reconnaissance satellite" development tests. 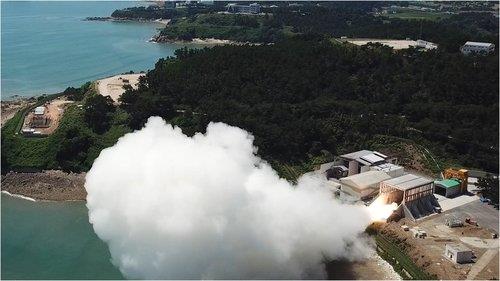 "(The test) came at a very grave juncture in which North Korea has recently breached its moratorium and launched an ICBM," the defense ministry said, referring to the North's voluntary suspension of nuclear and ICBM testing.

"Regarding space as a core realm that significantly affects national security, (the South) will strengthen space defense capabilities based on inter-service cooperation at an early date," it added.

Wednesday's test was aimed at verifying the projectile's performances, including fairing separation and the upper-stage attitude control features, according to the ministry.

The space rocket is designed to put a small satellite into a low Earth orbit for surveillance operations. Compared to liquid-fuel space vehicles, solid-based ones are usually simpler and more cost-effective to launch.

The ministry said it plans to launch an actual satellite mounted on the rocket in the future following additional development procedures.

The ADD and the Korea Aerospace Research Institute are also working together to explore the possibility of developing a new rocket combining both liquid- and solid-fuel engines to improve cost-efficiency and its capacity to carry a heavier payload.

The launch came less than a year after Seoul and Washington agreed to lift the "missile guidelines" restrictions that had barred South Korea from developing or possessing ballistic missiles with a maximum range greater than 800 kilometers.

It also followed a successful combustion test of a solid-propellant engine for a space rocket in July.

Space rocket technologies can be transferred to the private sector in the future to promote the development of the space industry, the ministry said.