SEOUL, March 30 (Yonhap) -- From a dazzling fountain water show to a club party, BTS fans will have lots of attractions and events to enjoy before and during the band's live concerts in Las Vegas next month.

Hybe, the K-pop powerhouse behind BTS, said Wednesday it has been preparing various sub-events for fans coming to visit the "Permission to Dance on Stage - Las Vegas" shows at Allegiant Stadium on April 8-9 and 15-16 (U.S. time) in person.

"We're preparing various programs where fans can feel the presence of the BTS throughout the city around the concert period," Hybe said on its online fan community platform Weverse.

Under the project called "The City - Las Vegas," various BTS-related programs in the fields of shopping, entertainment, food and beverage and accommodation will be offered on a 5-kilometer section of the road linking Allegiant Stadium, the concert venue, to the vicinity of the Strip from April 5-17, the company said. 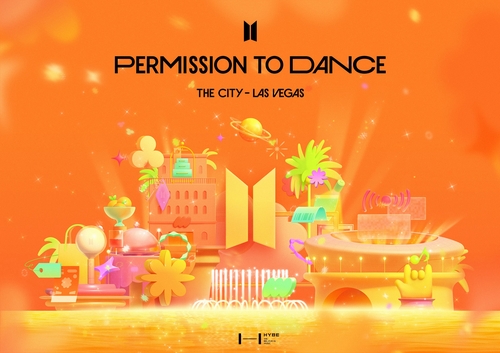 Leading the programs will be a water show choreographed to BTS songs at the Fountains of Bellagio, one of Las Vegas' most popular attractions. Visitors can enjoy the special fountain show every hour on weekends when the BTS concerts are held.

There will also be an exhibition of photos of the band practicing for the "Permission to Dance on Stage" live concert series that began last year and performing in its latest shows in Seoul.

After the upcoming concerts, Hybe will host a club party where fans can continue to enjoy BTS music.

For those who will travel to the city for the concerts, MGM Resorts International, a hotel chain, will run BTS-themed rooms, where specially designed cards carrying handwritten messages from band members and photo cards are placed, at 11 branch hotels located in the city center.

A restaurant at Mandalay Bay Resort & Casino will offer a special course menu that consists of Korean dishes that BTS members like the most, such as "bibim noodles" and fried chicken.

There will be an official BTS merchandise store and booth at MGM Grand Garden Arena and the stadium, respectively, according to Hybe. 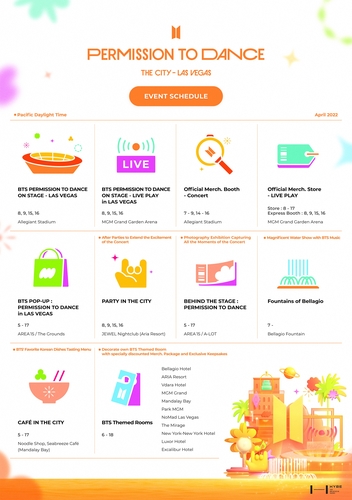