PAJU, South Korea, March 31 (Yonhap) -- A bus carrying a drama production crew slammed into a dump truck on a motorway in Paju, some 30 kilometers north of Seoul, Thursday, killing one person and injuring 10 others, three of them seriously, police said.

The crash happened on the four-lane Jayu Motorway in Paju at 7:50 a.m. when the truck directly entered the third lane after exiting a roadside gas station and cut in sharply in front of the bus, according to an initial police probe.'

One bus passenger in his 30s was killed in the accident and 10 others were taken to a hospital after sustaining wounds, three of them in critical condition, the police officials said. The bus driver was unscathed.

The bus was reportedly carrying the production crew for a period drama by cable channel tvN, scheduled to go on air in the second half of this year, and the accident victim was a producer.

The accident caused severe traffic congestion in the area as two lanes were blocked for about three hours to clean up oil spilled by the truck. The traffic restrictions were lifted shortly before noon.

Police said they are looking into the exact cause of the accident, including whether the bus was driving over the speed limit. 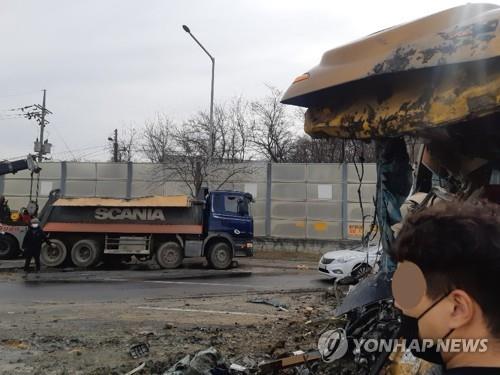 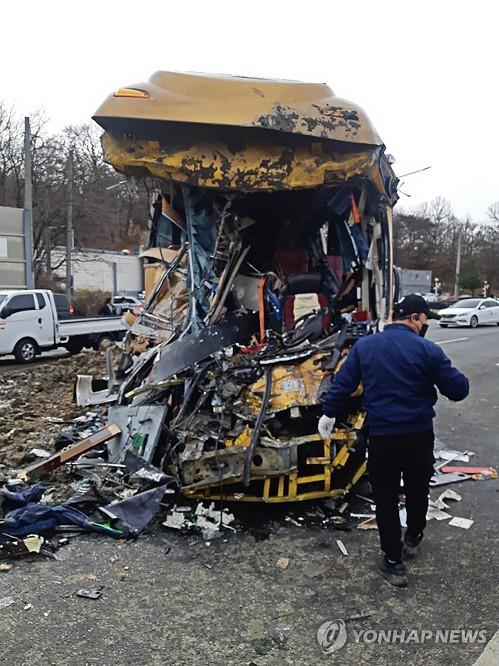 1 dead, 10 injured in dump truck-bus collision on motorway in Paju

1 dead, 10 injured in dump truck-bus collision on motorway in Paju