SEOUL, March 31 (Yonhap) -- After a two-year hiatus due to the COVID-19 pandemic, a large-scale lantern parade will resume next month in full scale as part of the UNESCO-listed Lantern Lighting Festival, an annual festival to celebrate Buddha's birthday, organizers said Thursday.

The Jogye Order, the country's largest Buddhist sect, said this year's parade will start at 7 p.m. on April 30 on the usual route in central Seoul from the Heunginjimun gate to Jonggak.

The annual lantern parade, in which tens of thousands of Buddhists carry colorful lanterns of various shapes, has provided a spectacle for the crowd coming to enjoy the centuries-old traditional festival.

Also known as "Yeondeunghoe" in Korean, the festival has been held annually in celebration of Buddha's birthday on April 8 on the lunar calendar. It was inscribed on UNESCO's Intangible Cultural Heritage of Humanity List in 2020.

But the massive parade was canceled that year and was scaled down last year due to the pandemic. 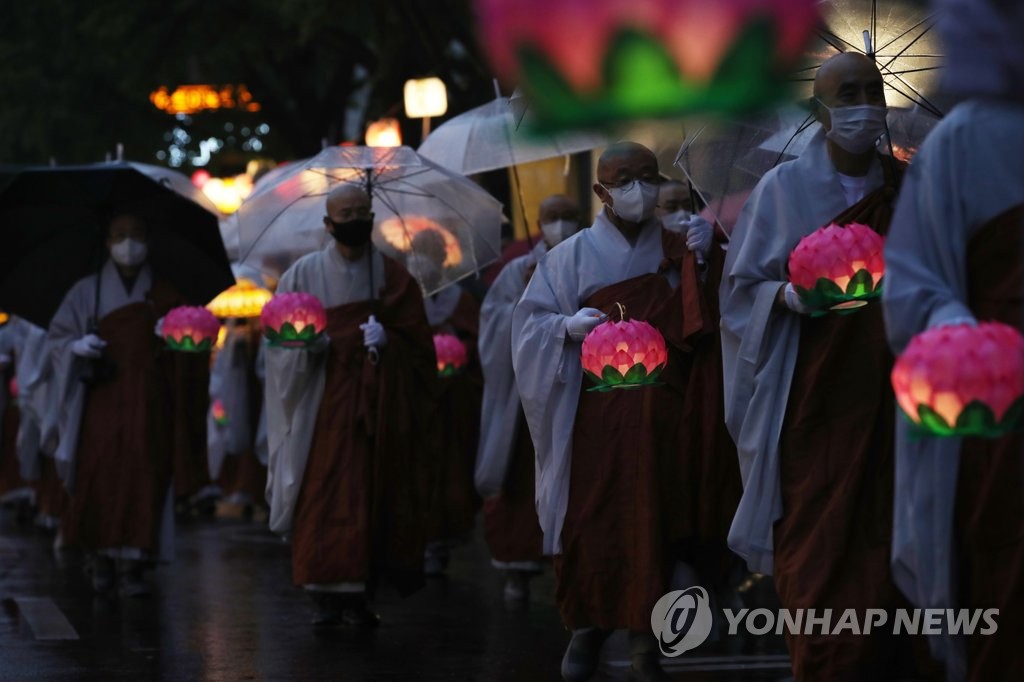 Jogye Order officials said they have decided to resume the annual parade under strict COVID-19 protocols, as the government's easing of some virus-related regulations has opened the way for the resumption of large religious and cultural events.

Including the parade, many programs have been prepared for this year's festival, according to the organizers.

The first event will be a lighting ceremony Tuesday for a large sculpture lamp installed at the public square in front of Seoul City Hall. The sculpture lamp is made of traditional Korean paper, or "hanji," in the shape of the three-story stone pagoda at Hwaeom Temple located in Gurye, 422 kilometers south of Seoul. The lighting ceremony will be streamed live on the festival's YouTube channel.

Main programs, including a cultural performance for participants returning from the annual lantern parade, will be held from April 29-May 1.

On May 1, Jogye Temple will run booths that provide visitors a chance to experience making paper lotus lanterns and playing traditional Korean folk games, according to the organizers. Buddha's birthday falls on May 8 this year.