WASHINGTON, March 31 (Yonhap) -- The United States is closely monitoring North Korea for future provocations, a Department of State spokesperson said Thursday, amid reports that the recalcitrant country may be preparing for a possible nuclear test.

Ned Price also said the U.S. and its allies will work to hold North Korea accountable for any new provocations.

"I am not a position to speak to intelligence one way or another, But what I can say is that the DPRK has engaged in a number of provocations in recent weeks. But this is a government that has engaged in provocations for a number of years now," the department press secretary said when asked about reports of a possible North Korean nuclear tests in the future. 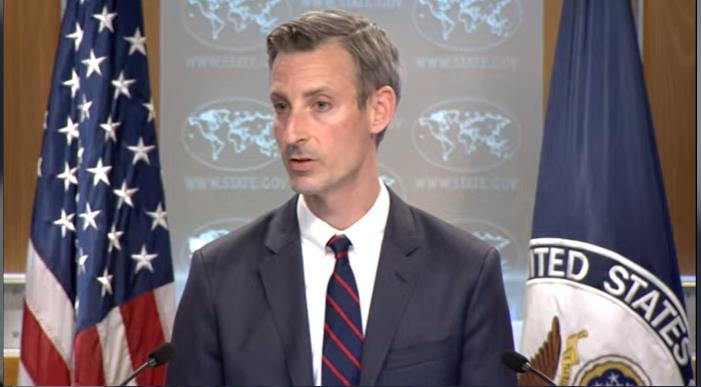 Earlier reports said the North appeared to be repairing the underground tunnels of its Punggye-ri nuclear test site that it purportedly demolished in 2018, suggesting preparations for a possible nuclear test.

Pyongyang has maintained a self-imposed moratorium on nuclear testing since its sixth and last test in September 2017, but said in January that it may restart "all temporarily-suspended activities."

The North fired an intercontinental ballistic missile (ICBM) last Thursday, ending its moratorium on long-range missile testing that had also been in place since late 2017.

"Just prior to what is assessed to have been the launch of a probable ICBM, we released information indicating that such a launch might be in the offing," Price said in a department press briefing. "So we are monitoring the situation very closely."

The spokesperson also warned there will be additional consequences should the North continue on its path of provocations.

"We have made clear that continued provocations will incur additional responses from the international community. We will continue to engage with our Japanese counterparts, our South Korean counterparts at the U.N. and with our partners and allies around the globe," said Price.

He also highlighted the U.S.' strong alliances with South Korea and Japan, insisting they will not change or weaken due to a change of government in any of the three countries.

"One thing I am competent will not evolve ... is our ironclad alliance with the ROK," Price said when asked if the U.S. expected South Korea's position toward the North to change under Seoul's incoming conservative Yoon Suk-yeol administration, referring to South Korea by its official name, the Republic of Korea.

"We will continue to have an incredibly close alliance with our South Korean partners. It is an alliance. It is a partnership that transcends administrations whether in this country, whether in the ROK, whether in Japan, for that matter in the trilateral context," he added.

The department official also called on U.N. Security Council (UNSC) members to hold North Korea accountable for its recent provocations that include seven rounds of missile launches in January alone that marked the largest number of missile test the North has conducted in a single month.

The U.S. had sought additional UNSC sanctions against North Korea for its repeated missile tests this year, but its efforts have so far failed, due to opposition from China and Russia, both veto power-wielding permanent members of the UNSC and close allies of North Korea.

"We believe that the responsible thing to do would be to discuss the North Korea's, the DPRK's ballistic missile and nuclear weapons programs in the diplomatic context," he added, noting the North has yet to respond "affirmatively" to U.S. overtures.