SEOUL, April 1 (Yonhap) -- South Korea's exports jumped 18.2 percent in March from a year earlier to reach an all-time monthly high on the back of brisk demand for chips and petroleum products, data showed Friday.

But high global energy prices also pushed up the country's imports to a record high last month, leading the country to post a trade deficit, according to the data compiled by the Ministry of Trade, Industry and Energy. 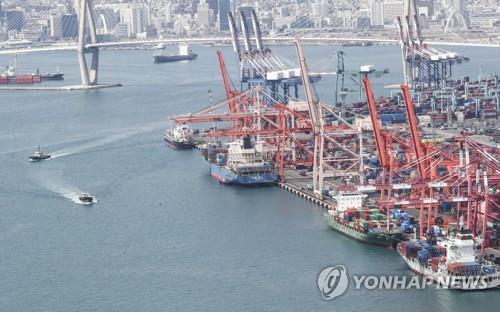 Outbound shipments stood at US$63.48 billion in March, up from $53.69 billion a year earlier. It is the highest tally since the ministry began compiling related data in 1956.

The previous record was set December last year when the figure came to $60.7 billion, the ministry said.

March marked the 17th consecutive month that the country's exports have logged an on-year expansion. Exports also posted a double digit growth for the 13th month in a row last month.

South Korea depends on imports for most of its energy needs, and its energy imports reached a record high of $16.19 billion in March, up from $7.72 billion a year earlier, the ministry said.

The country posted a trade deficit of $140 million in March, a turnaround from a trade surplus of $831 million the previous month.

By item, overseas demand for the country's major export items grew amid a global economic recovery, with sales of semiconductors and petrochemical products reaching an all-time high of $13.12 billion and $5.42 billion, respectively.

Bio firms also enjoyed a 24.2 percent on-year export increase in March amid the prolonged pandemic across the globe, the data showed.

(LEAD) Exports up 18.2 pct in March to all-time high on robust demand for chips

(LEAD) Exports up 18.2 pct in March to all-time high on robust demand for chips