SEOUL, April 2 (Yonhap) -- The National Intelligence Service has detected a total of 99 cases of attempted industrial espionage over the past five years, which would have cost domestic companies about 22 trillion won (US$18 billion), the agency said Saturday. 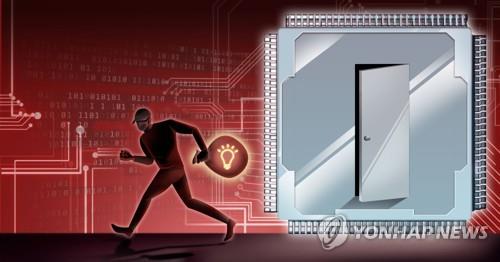 Hiring employees who had knowledge of the technologies was the most often used method in the cases.

The law bans employees from moving to rival companies in the same industry but the perpetrators circumvented the rule by having them hired by firms in ostensibly unrelated industries, according to the agency.

The NIS created a new bureau in charge of industrial technology security in January and is stepping up efforts to protect against the growing threat of corporate theft.

It provides security consulting to high-tech companies in cooperation with police and the ministries of science, industry and land. The NIS also conducts joint exercises with companies to fight computer hacking.

The NIS said the nation needs to toughen punishment of such crimes. By law, those convicted of industrial espionage could face up to three years in prison.