SEOUL, April 3 (Yonhap) -- President-elect Yoon Suk-yeol paid tribute to victims of a civilian massacre on the southern island of Jeju on Sunday, saying he will be committed to restoring dignity to them and their surviving families.

Yoon attended the memorial commemorating the victims of a 1948 massacre in Jeju. The occasion marked the 74th anniversary of the April 3, 1948, uprising of Jeju residents against the U.S. military-led rule following Japan's 1910-45 occupation of Korea.

The then government distorted the uprising as a communist riot and massacred an estimated up to 30,000 civilians, about 10 percent of the island's population at the time, in armed crackdowns over the subsequent years. 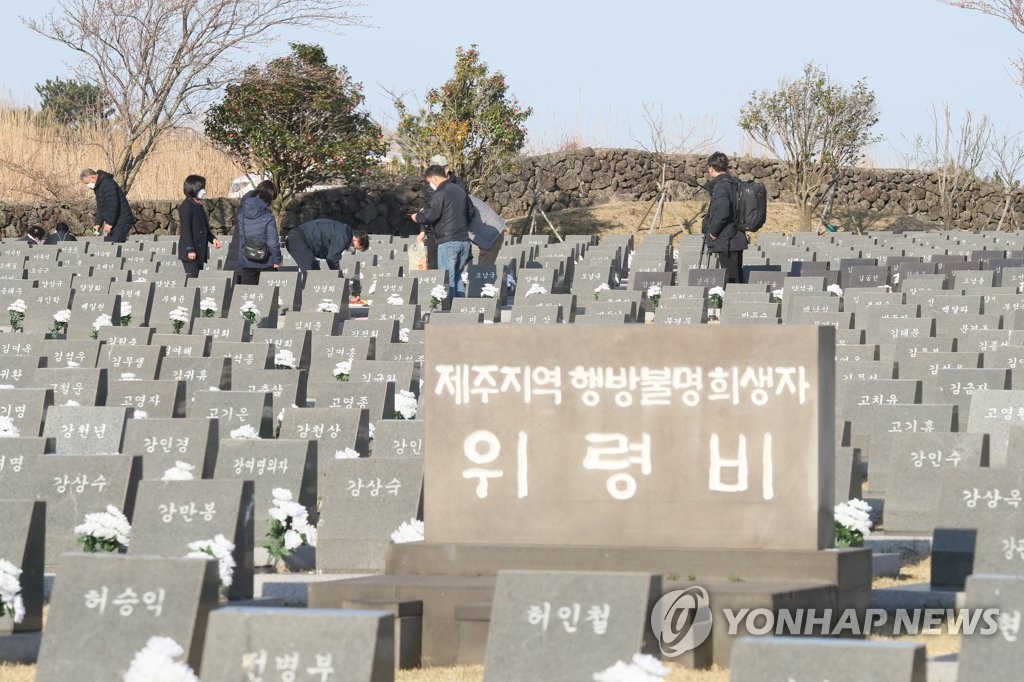 "It is our responsibility to heal wounds and care for scars from April 3, as we move toward the future of reconciliation and coexistence," Yoon said in his address during the ceremony at Jeju April 3 Peace Park. "The government will responsibly look after surviving family members who have endured so much pain."

Yoon is the first president-elect to attend the annual ceremony in Jeju, due to the change in the political calendar following President Park Geun-hye's ouster in 2017.

"Embracing innocent victims with the rest of the people and sharing their pain is an obligation for a free democratic state that pursues universal values of freedom and human rights," Yoon added. "We cannot change the past but the faith in our ability to build the future together shows the power of history of April 3 that saw tragedy evolve into peace."

Yoon had promised during his presidential campaign to do his best to properly compensate the victims' families if elected. Yoon said Sunday he will not forget about his pledge and added, "The new government will try to spread and promote the values of peace and human rights that Jeju April 3 Peace Park represents."

In January, the Cabinet endorsed a revised law on compensating Jeju victims and their families. President Moon Jae-in noted at the time that the revised law is the first legislative measure for civilian casualties before and after the 1950-53 Korean War